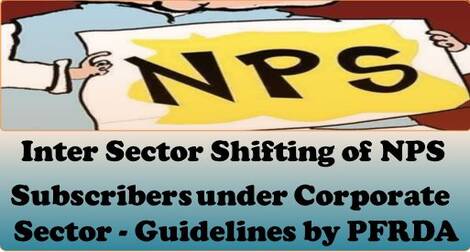 It has been observed that there are instances wherein the Subscribers under Corporate Sector have not exercised Inter Sector Shifting (ISS) before leaving their employers due to various reasons viz Resignation, Retirement etc and those employees are still tagged with their erstwhile employers in Central Record Keeping Agency (CRA) System even though they no longer work with those employers.

2. To avoid such instances, the Corporate may complete ISS as part of the exit formalities by suitably advising the employees to transfer their NPS Account to Point of Presence (POP) of their choice. Alternatively, the respective employers shall furnish the list of those employees and their Permanent Retirement Account Numbers (PRANs) to CRA/ POP for flagging with an intent to de-tag those PRANs from the employer as per the guidelines mentioned below:

3. a) Corporate employees ( Corporate attached through a POP)

(i) Post flagging PRANs of such employees as mentioned in para 1 above, in the CRA system, the choice of POP needs to be exercised by the Subscriber within three (3) months and if not, the PRANs shall be tagged to the respective POP of the Corporate employer under voluntary sector.

(ii) Corporates which are acting as POPs and also offer NPS to their own employees (predominantly banks) are covered under this category.

b) Employees of Direct Corporate (no associated POP)

(i) Post flagging PRANs of such employees as mentioned in para 1 above, in the CRA system, choice of POPs needs to be exercised by the Subscriber within three (3) months and if not, the PRANSs shall be tagged to eNPS under voluntary sector.

(ii) The Subscriber can continue under eNPS or migrate to any other POP of their choice.

The employees whose PRANs are under Corporate CG pattern of investment but have been flagged in the CRA system, need to exercise their choice of investment applicable as per their existing status, along with choice of POP.

Post flagging of the PRANs in CRA system, intermediary charges are to be borne by the Subscriber if the same were paid by the respective employer earlier.

4. CRAs are advised to develop suitable technology feature in order to comply with the above guidelines and the Subscribers are to be constantly communicated by CRAs for exercising their individual choice mentioned under various scenarios.