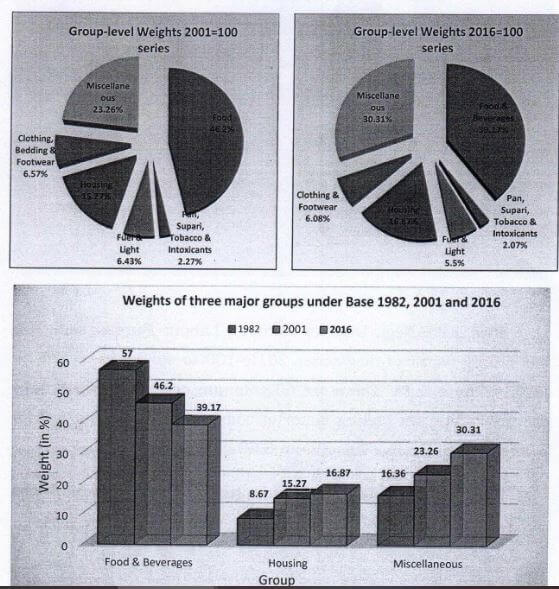 Labour Minister Santosh Gangwar says in future, base revision will be done every 5 years.

In this regard, Union Labour Ministersaid that the revision of CPI-IW with new base covering representing latest consumption pattern of the target population will prove to be in the interest of workers in times to come.

Shri Gangwar said this will help in measurements of macroeconomic indicators of the Indian economy. He added the improvements made in it, incorporating international standards and practices, will make it more comparable at international level.

Minister lauded the efforts of Labour Bureau for their steadfastness and exemplary role which have finally culminated in the release of updated series of CPI(IW). While lauding the efforts, Minister mentioned that data on all aspects of labour is crucial to serve as inputs in policy making and this justifies the existence of an organization like Labour Bureau, dedicated to labourand price statistics. With the ever increasing importance of data in the times to come coupled with the fact that India is a labour abundant nation, a dedicated organization for labourand price statistics like the LabourBureau merits strengthening.

Shri Gangwar told media persons that the LabourBureau is making impressive strides on all the fronts. It has a rich legacy of producing quality labour statistics, the roots of which can be traced to its establishment in 1920. From the launch of a much needed logo after 100 years of its existence to moving to a new building and now Labour Bureau has releasednew series of CPI(IW).

Shri Apurva Chandra disclosed that Labour Bureau has initiatedthree big surveys on Employment generated by Professionals and non-formal transport sector, Migrant workers and Domestic workers. Labour Bureau has also been mandated with the task of collection of data on recently proposed four labour codes, he said. The Secretary assured to give all possible support to Labour Bureau in its future endeavours.

The Report on “New Series of Consumer Price Index for Industrial Workers (Base 2016=100)” is an important publication meant to give insights into the concepts, definitions and methodology related to the new series of CPI-IW with 2016 as base year. This will serve as a useful reference book for researchers, academicians, scholars and all other stakeholders of CPI-IW. As per the recommendations of International LabourOrganisation (ILO), Index Review Committee (IRC) and National Statistical Commission (NSC), the base year of price index numbers should be revised at frequent intervals generally not exceeding 10 years to reflect the changes that take place in the consumption pattern of consumers. The CPI-IW is compiled as per international best practices & guidelines of ILO.

The CPI-IW (2016=100) series replaces the CPI-IW (2001=100) series. The new series is more representative in character and reflects the latest consumption pattern of the industrial workers.

Shri Gangwar elaborated some of the important improvements made under the new series of CPI-IW (2016=100) vis-à-vis old series (2001=100)which are as under:

The group level weights under newseries has changed in comparison to earlier series (1982 and 2001). The weight of Food & Beverages has declinedover time whereas the weight of Miscellaneous group(Health; Education & Recreation; Transport & Communication;Personal Care & Effects; Household Goods & Services etc.) has increasedsubstantially under 2016 series vis-à-vis earlier series. The weight of Housing Group has reported an increasing share over period of time.

The Group-wise Index for the month of September, 2020 varies from 113 points of Housing group to 132 points ofPan, Supari, Tobacco & Intoxicantsgroup under new series. 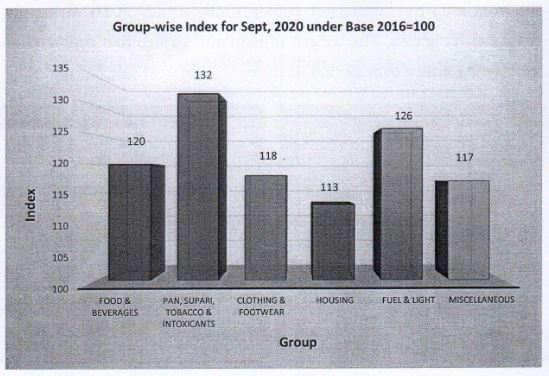 The Technical Advisory Committee on Statistics of Prices and Cost of Living (TAC and SPCL) has approved the new series.

The CPI-IW is the single most important price statistics, which has financial implications. It is primarily used to regulate the dearness allowance of government employees and the workers in the industrial sectors. It is also used in fixation and revision of minimum wages in scheduled employments besides measuring the inflation in retail prices.

The next issue of CPI-IW for the month of October, 2020 will be released on Friday 27th November, 2020. The same will also be available on the office website www.labourbureaunew.gov.in.