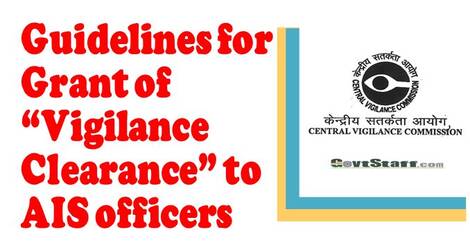 Kind attention is invited to DOPT’s OM No. 104/33/2005-AVD-I dated 29.10.2007 in which it has been instructed at para 3 of the OM that in cases where complaints have been referred to the State and no substantive response has been received from the State within three months from the date on which the reference was made, the Cadre Controlling Authority may provide a copy of the complaint to the officer concerned to seek his comments. If the comments are found to be prima facie satisfactory by the Competent Authority, vigilance clearance shall be accorded.

2. However, it has come to the notice of the Commission that the guidelines in the said OM are not followed by the Competent Authority due to which long pending complaints are shown against the officers while seeking Vigilance Clearance of the officer from the Commission. In some cases, the officers are not even aware that complaint is pending against them.

3. The Commission has, therefore, desired that all the Cadre Controlling Authorities may strictly adhere to the guidelines at para 3 of the OM of DoPT dated 29.10.2007 (copy enclosed) before seeking vigilance clearance in respect of individual officer from the Commission.