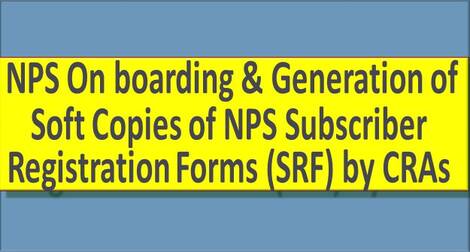 All Stake Holders under NPS

PFRDA in its endeavour to facilitate the Subscribers’ on-boarding and servicing their NPS accounts, has taken a slew of initiatives including opening the Accounts through digital means in a paperless manner. The Subscribers have been enabled to on-board through digital platform with the options to validate their Accounts, either through Aadhaar based e- sign or mobile and/or e-mail based OTP. In this respect, the roles and responsibilities of Points of Presence (POPs) and Central Record Keeping Agencies (CRAs) under NPS are specified as per the respective Regulations, Circulars and Guidelines issued by PFRDA.

(i). For NPS accounts opened digitally in CRA platform including eNPS, the soft copies of NPS Subscribers’ applications shall continue to be generated by CRAs and a copy thereof shall be shared with the Subscriber. In this digital channel, the subscribers shall have options for authentication either through e-Sign or through OTP before creation of Permanent Retirement Account Number (PRAN). Since the Subscribers are provided with the options for eSign or OTP, the NPS Subscribers will no longer have the option of submitting the physical application to the respective CRAs.

(ii). For NPS accounts opened through POP, whether through digital, physical or net-banking mode, the soft copies of NPS applications shall be generated by CRAs, capturing all information about the Subscribers as may be specified by PFRDA, which shall be furnished electronically by POPs to CRAs. CRAs shall also share the soft copies of the application with subscribers for their information.

(v). Even though the soft copies of NPS Subscribers’ applications are generated by CRAs on behalf of POPs and shared with Subscribers by CRA, the responsibility of accuracy of information, KYC compliance, due diligence etc. shall always be with POPs as specified under PFRDA (POP) Regulations, 2018 and various guidelines issued by PFRDA in this regard.

(vi) POPs which are accepting physical forms from the prospective Subscribers for opening of NPS Accounts but are not utilizing the services of CRA/ CRA-FC, shall preserve those physical forms at their end till the exit of those subscribers from NPS. For such Accounts, the subscribers’ data along with photo/signature shall be electronically shared by POPs with CRAs along with the information of physical sourcing and its safe-keeping by POPs, for the purpose of generating soft copies of NPS applications at CRAs.

(vii) CRAs shall also be generating the soft copies for the pre-existing eligible Accounts which are authenticated either through OTP ore sign. Detailed circular in this regard has already been issued on 3rd December 2020 vide circular no. PFRDA/2020/51/SUP-CRA/22 (copy enclosed).

(viii) lf the Subscribers desires to collect a soft copy of their NPS application with ‘time stamp’, the respective POP shall provide the same to its subscriber. ‘Time stamp’ indicates the time and date of submission of NPS Application in the respective digital platform.

(ix) CRAs shall ensure that the soft copies of NPS Application which are to be generated by them shall be uniform and in Portable Document Format ( PDF).

(x) It may be noted that after the implementation of the system development in line with the above guidelines, there won’t be any physical movement of NPS Account opening forms from POPs to CRA except for those POPs which would be utilizing the services of CRA/CRA FC.

3. This Circular is issued under Section 14 of Pension Fund Regulatory and Development Authority Act, 2013 and is placed under ‘Circulars’ in the CRA section of Intermediaries and under Circulars in the Regulatory Framework at PFRDA website.