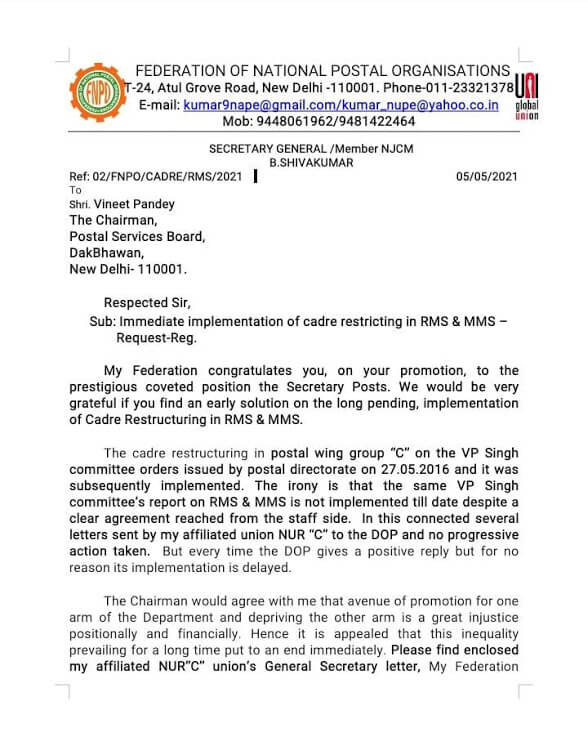 My Federation congratulates you, on your promotion, to the prestigious coveted position the Secretary Posts. We would be very grateful if you find an early solution on the long pending, implementation of Cadre Restructuring in RMS & MMS.

The cadre restructuring in postal wing group “C” on the VP Singh committee orders issued by postal directorate on 27.05.2016 and it was subsequently implemented. The irony is that the same VP Singh committee’s report on RMS & MMS is not implemented till date despite a clear agreement reached from the staff side. In this connected several letters sent by my affiliated union NUR “C” to the DOP and no progressive action taken. But every time the DOP gives a positive reply but for no reason its implementation is delayed.

The Chairman would agree with me that avenue of promotion for one arm of the Department and depriving the other arm is a great injustice positionally and financially. Hence it is appealed that this inequality prevailing for a long time put to an end immediately, Please find enclosed my affiliated NUR “C” union’s General Secretary letter, My Federation requests the chairman to draw up a concrete action plan for early implementation of the Cadre restructuring to RMS & MMS thereby uphold the principles of natural justice.

Read also |  Functioning of Post Offices for five days in a week in Delhi Circle - reg.

A line in reply on the action taken ts requested.

My union congratuiates on your promotion, to the prestigious coveted position the Secretary Posts. We would be very grateful if you find an early solution on the long pending, implementation of Cadre Restructuring in RMS & MMS. When one arm of the DOP the employees of RMS & MMS wing are still deprved whereas the other wing in the postal side it is implemented and it is unacceptable inequality and unconstitutional. The details of information put forth for a speedy action and for a time-bound action.

The Cadre Restructuring of Postal wing Group “C” orders released by the Postal directorate on 27.05.2016 as per the VP Singh Committee report (the then DDG Personnei) and thereafter carification issued, after a span of six months dated 21.11.2016. A committee was formed by Department under the chairmanship of Dr.Charles Lobo, the then Chief PMG Karnataka Cirde, presently member Operations, gave its recommendation on 22.09.2019 and the same was implemented by the Circles. Even a lapse of 4 years cadre restructuring recommendations was not implemented in the RMS wing of the Department. When the recruitment rules of PA/SA are same and also the training module, the non-implementation of Cadre restructuring so far, is a dear injustice. Thus it fuels in-equality coupled with resentment among the staff of RMS, towards the step-mother treatment to them, also demoralizing the workforce. The DOP RMS wing is deprived of their speedy promotion status benefits, alsa going have a deep implication in their financial/ persionary benefits in the long run. The arbitrary delay in implementation of the agreement reached with the unions seven years before is not known. The RMS employees felt the dream of Cadre Restructuring a reality when a virtual meeting was convened with the service unions by Dr. Charles Lobo the Member operations, a few months ago. Whereas still there is no fruitful implementation of the Cadre Restructuring in RMS result is forth coming and the apathy continues.

Read also |  Scheme for compassionate appointment — Relaxation of guidelines in the wake of COVID situation - Dept. of Posts

The Department after a marathon discussions with the service union, appointed a committee headed by the chairperson Ms. Sandhya Rani, the then PMG Hyderabad and now Member Postal Banking. A decade passed on the issue, and even after submission of the committee’s report for approval upto 2018, no status report, put forth to the union by the DOP. My union was told that a clarification sought by the Postal Directorate with the DOP&T. It was shocking to place it on record that all of a sudden the service union told in the year 2019, that DOP&T rejected the proposal.

The Department kept in dark the service union, on the final proposal sent to DOP&T, It is also not known the ground on which the cadre restructuring rejected by DOPT and the Kind of action taken by the department for further resubmission. Thereafter, it is learnt that the DOP appointed an intemal committee comprising of MMS. officers and the committee given its findings is also now with the DOP. It is surprising to note that the department again constituted a committee on 01.01.2021 and the said committee had a preparatory meeting on 22.1.2021. The outcome of the meeting till Not shared by the DOP with the service union. The service union already submitted detailed report on cadre restructuring of MMS while testifying the Ms. Sandhyarani Committee and the committees report should be implemented immediately. The staff of MMS very much demoralized on the inordinate delay in implementation of cadre restructuring. The delay in implementation will deprive the staff MMS their due timely promotion with far reaching financial benefits. My union wrote a urging letter on the Subject during February 2021, no constructive reply received from the Department so far.

My union appeals the Honorable Chairman to speed-up the sensitive issue of Cadre restructuring of RMS and MMS, by chalking-out a constructive, time-bound plan for its early implementation.

The Department reply on the action plan drawn, intimating the present position
of the cadre restructuring of RMS & MMS, is requested. 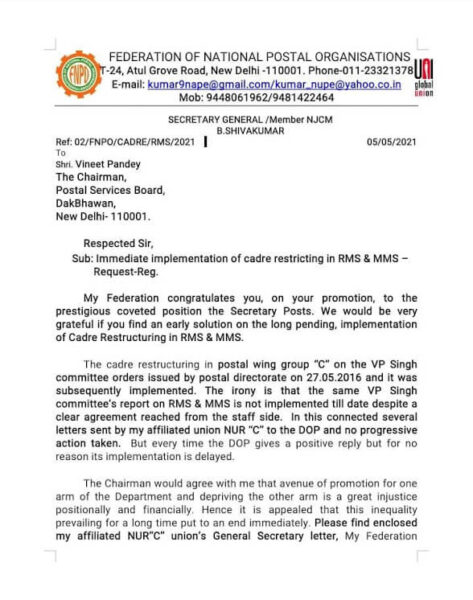 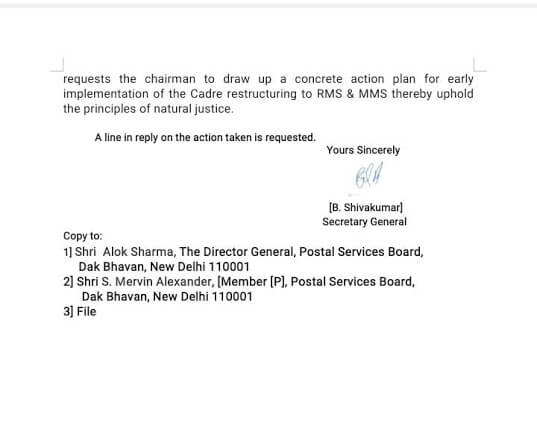 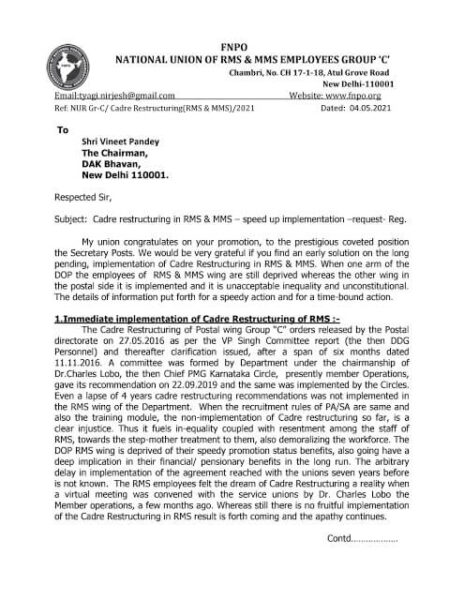 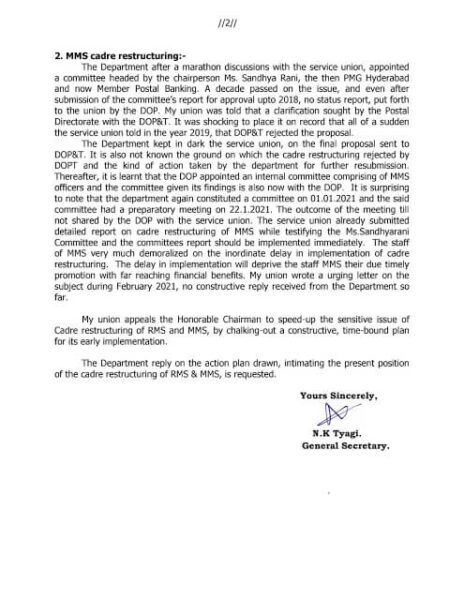