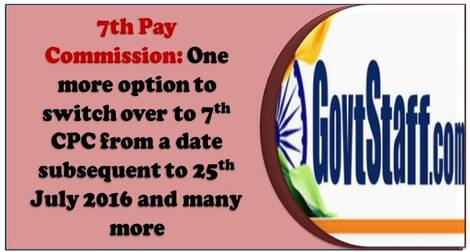 7th Pay Commission : One more option to switch over to 7th CPC from a date subsequent to 25th July 2016, Settle all anomalies, Grant Cadre Review in respect of Group B & C in every five years

7th Pay Commission : One more option to switch over to 7th CPC from a date subsequent to 25th July 2016, Settle all anomalies, Grant Cadre Review in respect of Group B & C in every five years

All members of the National Council
Staff Side – JCM

Sub:- Gist of the discussion took place today (30 / 07 / 2021) in the meeting with the Secretary DOPT on the issues pending in the National Council – JCM

In the introductory remarks Secretary and Staff Side members raised the following issues:-

1. In the 48th meeting of the National Council – JCM issues pertaining to COVID-19 relief to Central Government employees was discussed. However no Government orders are issued in this regard especially with regard to grant of special casual leave / quarantine Leave to employees tested COVID-19 positive and those employees who were not able to attend duty due to non-availability of public trans port because of curfew and Lockdown etc imposed by the State Government and also full reimbursement of COVID-19 medical treatment.

2. One time relaxation for Air travel in LTC -80 to the employees who have purchased Air Tickets from other than Authorized Agents is extended in the case of only in the case of J&K and NER states. The same benefit is not extended Andaman & Nicobar Island. A letter in this regard from the Secretary Staff Side is handed over to Secretary DOP&T.

3. In the 48th National Council – JCM meeting Chairman assured that he will personally monitor the functioning of Departmental JCM Councils and that he would write to a ll the Secretaries to hold the meeting. The progress in this regard may be informed to the Staff Side since meetings are not ta king place in many of the Departments.

4. One of the demand of the Staff Side is to grant out of turn Compassionate Appointment to the wards of employees who died due to covid -19 infection. While collecting the data it is understood that many state governments have not stated the reason for the death in the Death Certificate or stated reasons other than Covid positive.In this regard a letter from the Secretary /Staff Side was handed over to Secretary DOP&T.

6. Another important issue pending with DOPT is with regard to regularization of the Legal Strike inIndustrial Establishment. In this regard a letter from the Secretary Staff Side was handed over to Secretary DOP&T.

1. Extension of LTC-80 one time relaxation in the case of employees who availed LTC to A & N by purchasing Air Tickets from other than Authorized Agents.

2. Immediate out-of-turn Compassionate Appointment to the dependents of the employees who died of COVID-19 infection over and above the 5% ceiling limit

3. Regularization of the legal Strike period in the Industrial Establishments

Thereafter the following Agenda Points were taken up for discussion. The details of the discussion and the decision taken are given below against each item:-

The Staff Side demanded that employees up to Level 8 in the pay matrix (Grade Pay Rs.4800) may be brought under the purview of JCM Scheme. Secretary DOP&T after discussion stated that the entire issue of JCM Coverage is under consideration and the proposal of the Staff Side would also be considered.

The Staff Side brought to the notice of Secretary DOP&T that in the 47th National Council – JCM meeting Cabinet Secretary agreed that litigations in service matters should be reduced and for that judgments of the Hon’ble Supreme Court in General / common service matters should be considered for implementation for all similarly placed employees. However there are many such judgments which are not implemented to similarly placed employees. The staff side demanded that a policy decision in this regard may be taken by the Government. Secretary DOP&T stated that the demand has to be further studied.

3. Eradication of injustice to Casual. Contract and Outsourced workers: providing them the right to form a union in terms of Article 1 9.l(c) of the Constitution of India: Regularisation of all casual, contingent and outsourced workers.

4. Fill up all vacant posts in all grades.

5. Grant of 5 (five) effective upgradations to all Group B & C employees in entire service life.

7. Grant of Risk Allowance to the Employees involved in permanent and perennial recognized Risk Operations

The Staff Side insisted that the following four proposals given by the staff Side may be consider favourably :-

a). The existing risk allowance for the approved 45 risk operations may be brought under the purview of risk and hardship matrix recommended by the 7th CPC and the allowance should be not less than what is being paid to the Fire Fighting Staff.

b). After the Cabinet approval of 45 risky operations, many new risky operations have come in to existence in the Defence Establishments. Therefore such operations may also be included in the risk and hardship matrix.

c). Many new establishments have come into existence after the issue of the Govt. order on risk allowance, where risky operations are involved. All these left out establishments may also be included for payment of Risk Allowance.

d). Many category of employees such as Store keepers, etc., are not being paid risk allowance, even though they are involved in various Risk Operations. These left out categories may a lso be included for payment of risk allowance.

Secretary DOP&T stated that a committee is already constituted in the Railways to look into the Risk Allowance aspects and to submit recommendations. The Ministry of Defence also would be advised to do similar exercise. The Staff Side insisted that the employees who are eligible for Risk Allowance should be brought under the purview of Risk and Hardship matrix . After discussion it w as decided that the demand would be examined in consultation with Department of Expenditure.

Staff Side insisted that this issue should be settled in a timed bound manner since there is unrest amongst the employees deputed in Night Shift, since NDA is not paid to the employees whose basic pay is more than Rs.43600/-. Moreover during 5th CPC Supreme Court has ruled that NDA should be given to all employees deployed on Night Shift irrespective of any Basic Pay ceiling limit. Even Arbitration Award is also in favour of the employees. Therefore there is no Justification in imposing a ceiling limit for payment of NDA. Railway Ministry is in favour of payment of NDA without any Basic Pay ceiling limit. Therefore a general instructions is required to be issued in this regard to all the Ministries. Secretary assured to settle the matter at the earliest.

9. Central Government Employees may be granted one more option to switch over to 7th CPC from a date subsequent to 25th of July 2016

The Staff Side pointed out that sufficient period was not given to the employees to switchover to 7th CPC pay scale especially since 7th CPC has given two dates of increments. Additional Secretary Expenditure stated that it will be very difficult to extend the option period. The Staff side insisted that one more option may be given to a l l Central Government Employees to switch over to the 7th CPC pay scale and the cut-off date may be fixed as 31/12/ 2017. Secretary DOP&T asked Additional Secretary Expenditure to consider the demand of the Staff Side.

Read also |  Pension Cases: PAO should not go back to a period earlier than a maximum of 24 months preceding the date of retirement for raising observations relating to pay fixation

10. Settle All 7th CPC Anomalies represented by the Staff Side

a) Removal of condition of 3% stipulated to grant bunching benefit

b). Fixation of Pay on Promotion

The staff side was requested to provide further inputs for consideration of the demand.

Additional Secretary DOP&T stated that the issue ids still under consideration. The staff side insisted that since this is a long pending demand a decision in favour of the concerned employees may be ta ken without further delay.

Secretary Staff Side said that, we are thankful for implementation of GP Rs.5400 for SOs/SSOs of Accounts Department. He further said that, we have also raised the issue of similar treatment to SSEs and similarly placed Sr. Subordinates where we have demanded that GP Rs.4600 should be replaced with GP Rs.4800, and after 04 years they should get GP Rs.5400 . The Chairman(Cabinet Secretary) has given direction to the Chairman Railway Board to resolve this issue at an earliest in consultation with the Secretary(DoP&T) and Secretary(Deptt. of Exp.).

Staff Side insisted that a decision on this agenda may be taken since the request is a justified one. Secretary DOP&T advised to expedite the matter.

Concluding the deliberations Secretary DOP&T stated that the Department is studying the demand of Grant of Compassionate Appointment to the wards of the employees who died due to COVID-19 virus infection. However the point brought to his notice by the Staff Side with regard to non-mentioning of the reason for death in the death certificates would be also considered when the Government takes a decision for Grant of Compassionate Appointment as a special case in this regard.

Secretary Staff Side requested that a meeting of the standing committee may be convened at the earliest to discuss the pending issues. Secretary DOP&T agreed for the same.