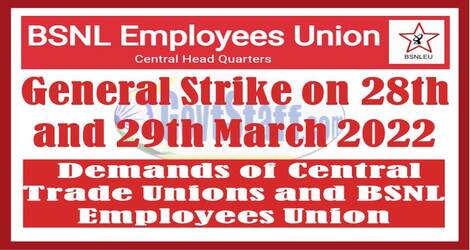 View :  Requesting to settle the Wage Revision with 5% fitment —  BSNLEU

It is very clear that, BSNL is being weakened, only due to the overall economic policies of the government. To save BSNL, the pro-private and anti-Public Sector policies of the government have to be defeated. BSNL employees alone cannot accomplish this task. The BSNL employees should join hands with the Indian working class, to save the Public Sector and thereby save BSNL. Hence, it is a must that, BSNL employees should join the General Strike to be held on 28″ and 29″ March, 2022 and to make the strike successful in BSNL. The following is the charter of demands for this General Strike.

3) No to Privatisation in any form and scrap the NMP;

4) Food and Income Support of Rs.7,500/- per month to non-income tax paying households;

5) Increased allocation for MNREGA and extension of Employment guarantee Scheme to urban areas;

8) Proper protection and insurance facilities for frontline workers serving the people in the midst of pandemic;

9) Increase in public investment in agriculture, education, health and other crucial public utilities by taxing the rich through wealth tax etc in order to revive and revamp the national economy;

11) Regularisation of contract workers, scheme workers and equal pay for equal work for all.