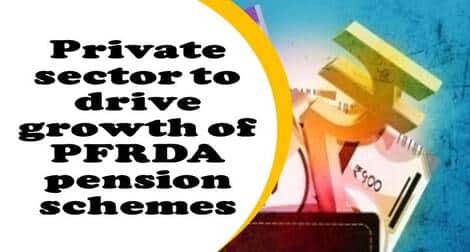 The private sector is expected to drive the growth of the National Pension System (NPS), which has witnessed an exponential rise over the last five years, in terms of the number of subscribers as well as assets under management, a study paper of PFRDA said.

Led by the Atal Pension Yojana (APY), the number of subscribers between 2017-18 and 2021-22 have multiplied over three-fold, while the assets under management rose by over four-fold led by NPS, said the paper written by PFRDA member Deepak Mohanty.

The Pension Fund Regulatory and Development Authority (PFRDA) regulates the flagship Atal Pension Yojana (APY) and the National Pension System (NPS). “The annual rates of return in various NPS schemes since inception in the range 9.0-12.7 per cent and for APY at 9.4 per cent have been very competitive vis–vis alternate saving instruments besides the primary benefit of steady income,” as per the paper.

Since the introduction of NPS in 2004, and more recently APY in June 2015, the pension sector has expanded in India. The total number of subscribers have increased over three-fold from 1.5 crores in March 2017, to over 5.2 crores by March 2022, which is dominated by APY.

Mohanty said India’s pension sector (NPS plus APY), provides a flexible mode of old age income security not only for salaried employees but also for the common person. “The future expansion in NPS is expected to emanate from the private sector both the salaried and self-employed.

“Steps at enhanced pension-literacy, both of the subscribers and the intermediaries, coupled with a nudge from the regulator and the government along with encouragement to young adults to join a pension scheme would accelerate our movement towards a pensioned society,” he said.

The paper said these are early days for the pension sector in India and there is tremendous scope for growth as our per capita income rises further and the country transitions to a high middle-income country.

“Our demographic structure, with a greater proportion of younger people, favours a phase of accumulation. Since longevity is inching up, so also the need for a steady stream of income is increasing to mitigate old-age poverty. Further, as the traditional family support system changes with increasing urbanization there is even a greater necessity for an independent source of income in old age.” As per the study, given the fiscal situation, the government may nudge people toward NPS as has already been done for government employees. Also, as the pension sector progresses, there will be a need for a sound regulatory architecture to ensure that pension funds are managed on prudent lines while safeguarding overall financial stability.

In this direction, the PFRDA became a statutory pension sector regulator in February 2014. “PFRDA has the oversight role over the pension sector; and has taken a number of steps to ensure that the intermediaries involved in the relevant pension architecture function seamlessly. On boarding and exit of pensioners have been made easy with greater usage of technology. While there is a mechanism for quick redressal of pensioner grievances, it is being further strengthened,” the paper added further.

It also highlighted the importance of financial literacy for people to reap the benefit of the formal financial sector. Having reading or writing ability is not enough for financial literacy, it said. Further, financial inclusion and empowerment will remain incomplete without each member in a family has got a pension account.

In this direction, given the nature of the pension product where the payoff is not immediate, it needs a nudge by all concerned employers, intermediaries, the government and the pension regulator to induce people, particularly young adults to join a pension scheme. “There is immense merit in joining young, as with small contributions sizable corpus could be accumulated given the power of compound interest rate, providing substantial steady income in one’s post-working life.” NPS mainly caters to the pension needs of the organised sector employees, including the government staff, while APY is targeted for those working in the unorganised sector.

PFRDA said the views expressed in these papers are those of the author and not necessarily that of the institution.

NPS 79 NPS 100 Pension 204 PFRDA 50
Newer Post
One more extension to timelines for finalization of e-APAR for the year 2020-21 through HRMS upto 30.04.2022
Older Post
Recommendations for President’s Police Medal for Distinguished Service and Police Medal for Meritorious Service on the occasion of Independence Day, 2022