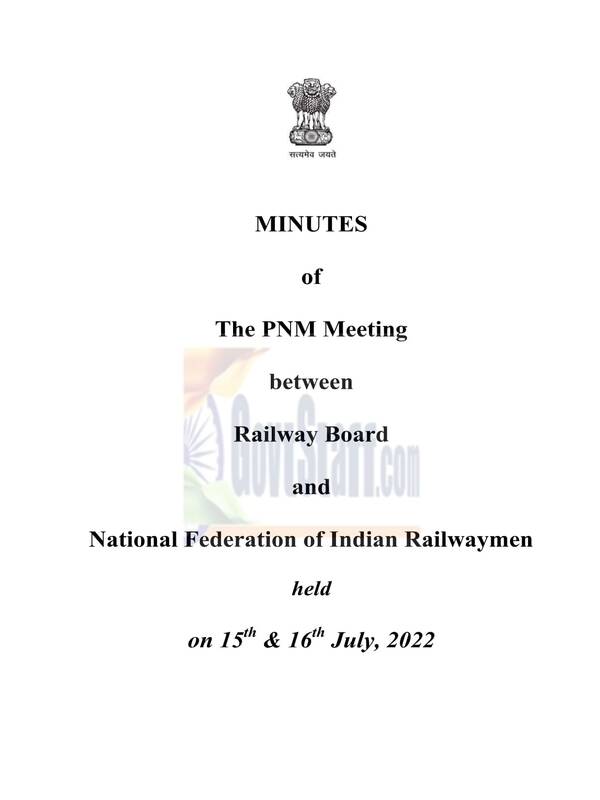 MINUTES of The PNM Meeting held between Railway Board and National Federation of Indian Railwaymen (NFIR) on 15th & 16th July, 2022

MINUTES of The PNM Meeting held between Railway Board and National Federation of Indian Railwaymen (NFIR) on 15th & 16th July, 2022

MINUTES
of
The PNM Meeting
between
Railway Board
and
National Federation of Indian Railwaymen
held
on 15th & 16th July, 2022 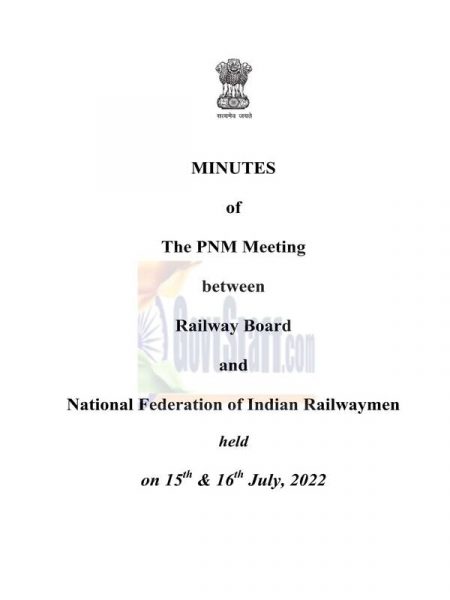 MINUTES OF THE PNM MEETING HELD BETWEEN RAILWAY BOARD AND NFIR ON 15TH & 16TH JULY, 2022

CRB & CEO as Chairman of the meeting addressed the gathering.

Chairman, Railway Board & CEO welcomed Shri Guman Singh, President/NFIR, Dr. M. Raghavaiah, General Secretary/NFIR, other representatives of NFIR, all Board Members and other members of the Official Side to the PNM Meeting. Chairman, Railway Board & CEO congratulated all Railway employees for their hard work and dedication during 2021-22 and also during the current year which has resulted in best ever performances in many areas, despite the challenges of Covid Pandemic. He also congratulated the Federations for their continued cooperation and expressed hope that Railway employees will continue to work with the same dedication and cooperation to achieve even better results. It was observed that Agenda Items of PNM/NFIR will be discussed and resolved fruitfully in this meeting.

CRB & CEO informed the Federation as under:-

Chairman, Railway Board & CEO thanked all Railwaymen for their performance and hard work and also appealed them for even a better performance to achieve the targets and desired results.

Federation (NFIR) raised following points in their opening remarks during the meeting:-

8/2017: Policy guidelines for Medical fitness of employees of various medical categories who have undergone LASIK Surgery-reg.

A Committee of Ophthalmologist have looked into the medical fitness of employees who have undergone LASIK Surgery for suggesting necessary guidelines in this matter for medical fitness of employees and for effecting revision in Indian Railway Medical Manual, 2000. After receipt of report of the Committee, its recommendations will be put up to concerned Directorates for their comments before obtaining final approval of Board. Federation requested to expedite this five years old pending issue.

Federation requested for a separate meeting with CRB.

12/2015: Maintenance of cleanliness on trains and at stations etc. – implementation of Food Safety and Standard Act, 2006 in Railways.

15/2022: Risks being faced by the Railway employees in the course of performing duties resulting loss of lives and injuries

Federation informed that the guidelines issued by Board vide letter No. 2019/O&M/8/3 dated 18.07.2019 have not been implemented on some of the Zonal

Railways in particular on ECR. It was decided that this matter will be reviewed with the concerned Zonal Railways.

(i) Working of MEMU Trains with ALP –

Matter is under consideration.

Feedback is being sought from the Zonal Railways for examining the matter.

Concerns expressed by Federation during the meeting will be examined.

In the light of discussions, it was decided that Board’s letter dated 01.12.2016 issued in this matter, will be reiterated.

Board’s instructions in this matter will be reiterated. Feedback regarding updated position of facilities available at Rest Houses meant for Ticket Checking Staff will be obtained from Zonal Railways and conveyed to the Federation.

Report of the Director’s Committee will be finalised within a period of two months. Thereafter, the matter will be reviewed as regards the norms for manning of coaches. Federation will be consulted further.

37/2015: Simultaneous creation of posts of Ticket Checking Staff when new trains are introduced or runs extended-reg.

Instructions have been issued for deployment of surplus ECRC staff in ticket checking activities vide letter No. 2018/TG-V/1/5 dated 27.07.2022. Copy will be given to the Federation.

47/2016: Withdrawal of 2nd Pantry Car from Rajdhani trains – Non-provision adequate accommodation for escorting staff of Mechanical, Electrical and S&T Departments and to the Train Superintendent – Staff put to hardship-reg.

Necessary instruction has already been issued by NWR.

04/2021: Revision of Pension in the case of retired Technicians Grade-Ion Indian Railways-wrong fixation of Pension to the pre-0l/0l/1996 Pensioners – review urged.

In the light of facts stated by the Federation, the matter needs to be reviewed.

Federation was informed that the nodal Ministry i.e. DOP&PW has not agreed with the appreciation of the Federation. Federation, however, did not agree with the views of DOP&PW.

It was decided that the existing procedure for payment of Travelling allowance to retired Railway servant acting as Defence Helper will be examined and simplified.

Item regarding promotion opportunities was finalised. Federation requested for continuation of the remaining 5 Printing Presses as they are giving good results. Federation also demanded that Railway should give adequate work to these Printing Presses.

15/2016: Acute shortage of staff quarters of various types and non-provision of toilets in the suburban section of Mumbai on Western Railway-reg.

Updated status will be obtained from CR and WR. Federation informed that funds allocated under Plan-Head remained unutilised on WR. It was decided that the matter will be reviewed with WR.

27/2016: Review of license fee on the Railway land allotted to the Staff Welfare/ Organizations at Railway settlement of Bilaspur-reg.

The issue involved is whether Government aided schools located on Railway land at Bilaspur should be treated as ‘Staff Welfare Activities’ or not. The issue of reviewing license/lease fee can only be taken up thereafter. Federation demanded follow-up action on the Record Note of Discussions held by AM(Finance) with Federation (NFIR) on 23.03.2018 on the subject of review of license fee.

59/2018: Urgent need for allotment of additional funds under DRF for PH-51, PH-52 & PH-64 for constructions of Railway quarters on Central Railway, Mumbai area, on replacement account-reg.

In the light of discussions held, a further reference will be made to CR and the matter will be examined.

2/2022: Grant of increments to the employees stagnating at the maximum of the Pay Band/Scale under 7th CPC Pay Structure

A copy of the reference sent to DOP&T in this matter will be shared with the Federation.

The matter is under examination in Board’s office and necessary inputs have been called for from Zonal Railways. Details from some of the Railways are still awaited. The matter will be examined after receipt of details. NFIR cited specific details of cases pertaining to WR.

9/2022: Recasting of avenue of channel of promotion in respect of isolated categories (Medical & Para-Medical)

Matter will be examined in consultation with Health Directorate.

18/2022: Thirty percent (30%) add-on pay element for pensionary benefits to the families of Chief Loco Inspectors who died while working as Instructor (ex-cadre post)

Views expressed by Federation during the meeting will again be referred to Ministry of Finance (Department of Expenditure).

30/2022: Revision in the designations prescribed for Nursing Personnel working in the Railway Hospitals/Health Units

A joint meeting with both the Federations involving DG(RHS) will be held.

1/2022: Earmarking 10% of the DR quota vacancies of Group ‘C’ categories to be filled by LDCE open to all

Federation mentioned about their earlier discussion held on 11.10.2020 with the then CRB and Hon’ble MR and requested that the matter be re-examined.

The matter will be again examined. Federation will share details of such cases.

Detailed comments on the issues raised in the staff side demand have been called from Northern Railway. Matter will be examined on receipt of the Railway’s comments in consultation with the concerned Directorates.

17/2022: Counting of officiating period as residency period in the case of Sr. ALPs/Shunters promoted on ad hoc basis as Loco Pilot (Goods) in the administrative exigencies- case of South Central Railway

Federation demanded that the matter be submitted for consideration of Member(TRS) and meeting be convened at the level of Member(TRS).

21/2022: Fixation of pay of disabled/medically unfit Staff, other than Running, on being appointed against alternative posts in revised (6th& 7th CPC) pay structure

Federation will share the specific cases with illustration for examination of the matter.

27/2022: Induction of erstwhile Group ‘D’ Staff from outside into the Workshop in CLW against 40% quota – relaxation of upper age limit from 33 to 45 years

Matter is under examination.

Federation stated that the number of cases to be handled by Railway officials acting as Defence Helper be restricted to seven cases. The other demand of the Federation that Railway employees (serving/ retired) may act as Defence Helper on any zone without any restriction on territorial jurisdiction of Zonal Railway, is under examination.

26/2015: Creation of posts for TRD Organisation in Railways.

The requirement of TRD posts across IR needs to be reviewed with reference to yardsticks. Zonal Railways have been advised to utilise the sparable posts and to re- distribute them as per extant instructions. If vacant posts are not available within the zone, Zonal Railways may approach Board for resolution.

02/2016: Training to newly recruited ALPs in Electric and Diesel traction at the time of initial appointment – Additional chances in either of the tractions- requested.

Federation sought for a separate meeting with PED(Safety).

20/2017: Refresher courses and special training to the staff of S&T Department in Railways-reg.

27/2018: Payment to the Teachers imparting training to the Loco Running Staff and change of non-standard designation – case of Eastern Railway-reg.

Federation contended that the Diesel Traction Training Centres at Andal and Burdwan are recognised training centres as notified by Railway Board and therefore, the Trainers deployed in these training centres need to be given not less than GP 4200/- (PB-2)/ Level-6 and they should also be paid training allowance (15% of Pay). After discussion, it was decided to review the matter.

Federation was explained that Ministry of Railways will pursue with Ministry of Finance for relaxation regarding creation of posts. Pending that, the powers for redistribution of posts may be utilised as discussed in Item 45/2018.

12/2022: Allotment of vacant Railway quarters to the retired Railway Officials and their dependent relatives

23/2022: Introduction of five (05) days per week working in the administrative offices in Production Units of Indian Railways