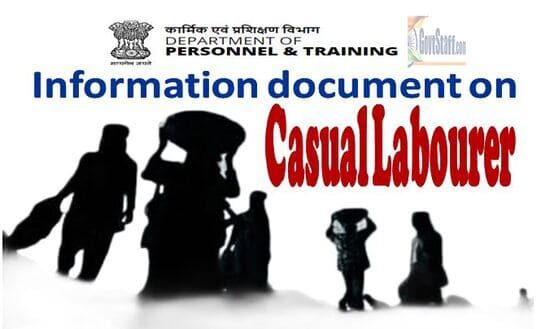 Department of Personnel and Training has issued instructions from time to time regarding various provisions governing the subject of Casual Labourer. These instructions are broadly categorized as under:

B). SCHEME OF 1993 (Grant of Temporary Status and Regularisation of Casual Labourer)

View :  Grant of Paid Holiday on 28th Oct, 3rd Nov & 7th Nov 2020 to the employees in view of General Elections to the Legislative Assembly of Bihar

Ques.1. Whether the casual employees who were not initially engaged through employment exchange are entitled to the benefit of temporary status?

Ques.2. Whether temporary status could be granted to the part-time casual employees?

Ques.3. Will the casual labourers initially engaged after crossing the upper age limit prescribed for recruitment to Group ‘D’ posts be eligible for grant of temporary status?

Ans.3. No age limit has been prescribed for grant of temporary status. However, for the purpose of subsequent regularisation, the conditions regarding age and educational qualifications prescribed in the relevant recruitment rules will apply.

Ques.4. Will the wages of casual employees be debited to the salaries sub-head of the establishment or to the contingent sub-head?

Ans.4. Since the casual employees on grant of temporary status would be entitled for wages on actual basis, their wages will have to be debited to the sub-head ‘wages’.

Ques.5. For the purpose of assessing leave entitlement how should qualifying period be reckoned?

Ans.5. Qualifying period should be reckoned with reference to actual number of days duty performed ignoring days of weekly off, Ieave and absence etc. All days of duty will be counted irrespective of intervening spells of absence, which do not constitute break in service.

Ques.6. Frequency at which leave will be credited?

Ans.6. Twice a year. On the 1st of January and 1st of July credit will be afforded for the preceding half year or fraction thereof, on a pro-rata basis at the rate of one day for every 10 days of work.

C. ADDITIONAL BENEFITS TO THE CASUAL LABOURERS WITH TEMPORARY STATUS (CL-TS) IN CONTINUATION OF SCHEME OF 1993.

View :  Consolidated Instruction on Combination of Appointments incorporating provisions of FR 49 and Additional Charge of posts - Updated on 30.09.2022

(i) Adjustment of Employees contribution in Accounts:- Amount may be credited to individual’s GPF Account and the account may be recasted permitting up-to-date interest (Authority FR-16 & Rule 11 of GPP Rules)

(ii) Adjustment of Government contribution under NPS in Accounts:- To be accounted for as (-) Dr. to object heads 70-Deduct Recoveries under major Head 2071- Pension and other Retirement benefit-Minor Head 911- Deduct Recoveries of overpayment (GAR 35 and para 3.10 of List of Major and Minor Heads of Accounts)

(iii) Adjustment of increased value of subscription on account of appreciation of investment:- may be accounted for by crediting the amount to Govt. account under M.H.0071- Contribution towards Pensions and other Retirement Benefits 800- Other Receipts (Note under the above Head in LMMHA).

On the implementation of the recommendations of the 7th Central Pay Commission as per Government of India Notification dated 25th July, 2016, the Casual Labourers with Temporary Status will continue to receive their wages with effect from 01.01.2016 as per provisions of the Casual Labours (Grant of Temporary Status & Regularisation) Scheme, worked out on the basis of the pay scales of Group ‘C’ as per Level 1 of the Pay Matrix recommended by the 7th Central Pay Commission and approved by the Government provided they are matriculate. In case of the similarly placed non- matriculate Casual Labourers with Temporary Status the above benefit of wages w.e.f. 01.01.2016 may he extended only after imparting the requisite training, by the respective administrative Ministries/ Departments on the lines indicated in the MOF O.M. No. 1/1/2008-IC dated 24.12.2008.

Note 1: Both the scheme of 1993 pertaining to Casual Labourers and Regularisation of irregularly appointed persons for 10 years or more in the light of Uma Devi judgement were one time measure only and no other scheme has been issued by DoPT.

Note 2: List of the OMs mentioned in this document is annexed. In case any reference to the relevant OM is required, the same may be accessed from the Archive Section of DoPT’s website.