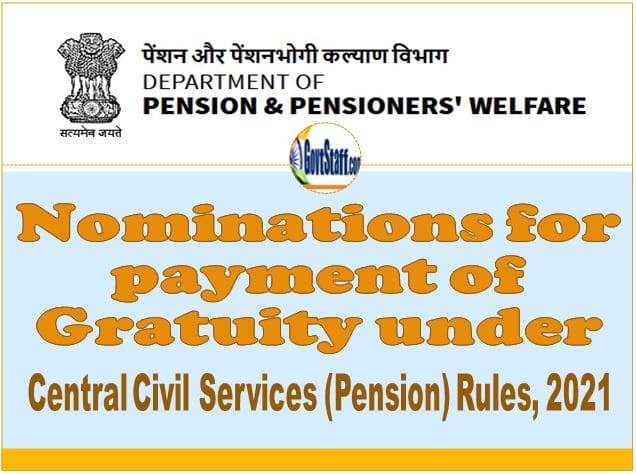 No. – 28/91/2022 -P&PW(B)/8331
Government of India
Ministry of Personnel, Public Grievances and Pensions
Department of Pension and Pensioners’ Welfare

2. As per Explanation below Rule 45, family for the purpose of payment of gratuity means:

(ii) Husband, including judicially separated husband in the ease of a female Government servant,

(vi) father including adaptive parents in the case of individuals whose personal law permits adoption;

(vii) mother including adoptive parents in the case of individuals whose personal law permits adoption;

View :  Non-payment/Delay in payment of retirement benefits on account of delay in verification of Caste Certificate in respect of retiring employees : RBE No. 33/2022

(x)) children of a pre-deceased son.

Rule 46 inter alia provides that if the Government servant has one or more: members of family as mentioned above, the nomination shall be in favour of any member or members of his family.

3. If the Government servant has no family, the nomination can be made in favour of a person or persons, or a body of individuals, whether incorporated or not.

View :  Authorisation of Banks for disbursement of Railway Pension consequent upon amalgamation of Banks: RBA No. 07/2022

7. All Ministries/Departments are requested ‘that the above provisions regarding nominations for Gray under Central Civil Services (Pension) Rules, 2021 may be brought to the notice of the personnel dealing, with the pensionary benefits in the Ministries/ Department and attached/ subordinate offices thereunder, for strict implementation.

(S. Chkrabarti)
Under Secretary to the Govt. of India