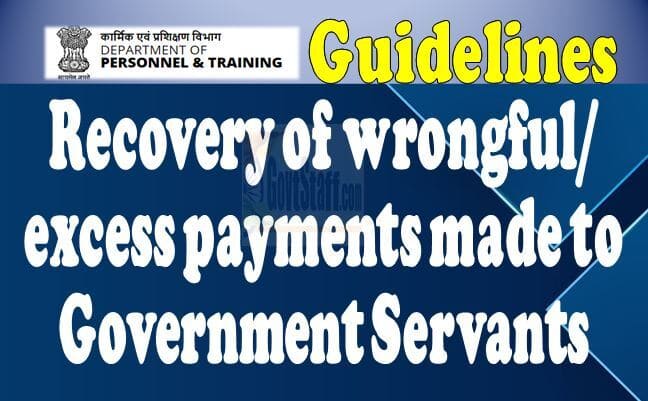 Subject: Recovery of wrongful/excess payments made to Government Servants.

2. Recently, the Hon’ble Central Administrative Tribunal (CAT), Lucknow Bench, while hearing the OA No. 302/2022 (Atul Chandra Srivastava Vs Uol & Ors.) and OA No. 303/2022 (Mohammad Irshad Vs UoI & Ors.) has passed an interim Order dated 20.07.2022 expressing concern over the mistakes/clerical faults on the part of Ministries /Departments / Offices leading to incorrect fixation of pay etc., which result in excess – payments being made to the Government Servants.

3. The Hon’ble Tribunal in its Order dated 20.07.2022 referred to the judgment dated 18.12.2014 of the Hon’ble Supreme Court in CA No. 11527 of 2017 (arising out of SLP C No.11684 of 2012) State of Punjab & Ors Vs Rafiq Masih (White Washer) etc. and instructions issued vide DoPT’s OM no 18/03/2015-Estt.(Pay-I) dated 02.03.2016 in light thereof. In its judgment, the Hon’ble Supreme Court identified five situations wherein recovery of excess payment made would be impermissible in Law. One of the situations where recovery of excess payment has been decided to be impermissible relates to the employees belonging to Class-III and Class-IV Service (or Group ‘C’ and Group ‘D’ services). The Hon’ble Tribunal has noted that the applicants in both the cases under consideration are Group ‘C’ employees and the law in this regard has already been laid down in the judgement dated 18.12.2014 of the Hon’ble Supreme Court and subsequent instructions issued vide DoPT’s OM dated 02.03.2016.

4. In this context, it is observed that the time taken by the Ministries/Departments/Offices to discover mistakes/clerical faults in pay fixation of their employees is highly avoidable. The situation of overpayments occurs on account of erroneous calculation of payments due to an employee. If not detected in time, amount becoming due for recovery due to these excess payments keep accruing. In many cases, these overpayments come to notice of the administrative authority at a very late stage resulting in substantial amounts becoming due for recovery. However, in the wake of the Order dated 18.12.2014 of the Hon’ble Supreme Court referred above, these recoveries are to be considered for waiver in the types of cases identified therein. As a result, the administrative authorities concerned are compelled to explore other alternatives available to recover the amount involved or seek approval of the D/o Expenditure to waive off the same in accordance with the procedure prescribed in this Department’s OM dated 02.03.2016 read with the instructions contained in DoPT’s OM No 18/26/2011-Estt (Pay-I) dated 06.02.2014.

5. The matter has been examined in consultation with the D/o Expenditure. It is advised that —

All Ministries/Departments of Government of India. 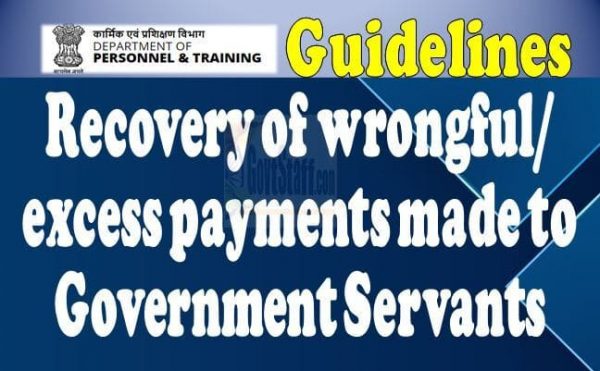