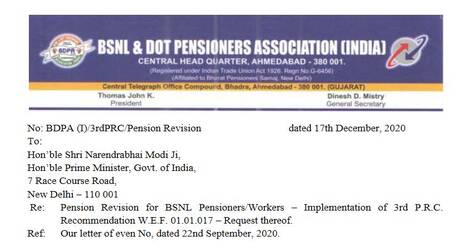 1. We happy to write to invite your kind attention of our captioned letter on the subject under reference. We are addressing you, once again Sir, as we have confident and trust that you are concerned for the citizen of the country and keeping in view that virtual fact, the government is taking all the steps to not only to revive but to make BSNL a Competitive Entity in the country; so that the private communication are not getting free hand to exploit the citizen of the country in providing them communication and other value added services.

2. Aiming to have success in time, Govt. has taken firm and time basis decisions and is being implemented. As desired by the Govt. more than 80,000 employees have been retired under VRS 2019 scheme and present superannuation system. Now, after issuance of sovereign guaranty and bonds to a tune of 8500 crore, we are sure the BSNL will once again flourish in its pre-era of earning handsome profit in short time as expenditure towards salaries is curtailed drastically.

3. To keep a company in most competitive form, the employees also play a vital role and their interest is required to be taken care of by the Company. The BSNL Employees/Pensioners are due for their Wage/Pension Revision as per 3rd P.R.C. Recommendations and the Cabinet has also taken affirmative stand in this direction long back.

4. Admittedly, we know that our issue comes under exclusive administrative powers of the Ministry of Communication, as the Department of Telecom and Bharat Sanchar Nigam Limited and should have been settled there and there only but unfortunately having representing our burning issue to all concerned authorities and despite the instructions from your office, we could not get any result. We had represented Memorandum to your office on 25.02.2019 and this was also followed by our various branches throughout the country and we were informed that DoT is being asked to settle the grievance.

5. We, therefore, once again reiterate our desire to consider our just and genuine long pending demand and furnish the brief of our say in brief as under:

A. BSNL Pensioners were accorded for approval of recommendations of 1st P.R.C. w.e.f. 01.10.2000 at par with working employees simultaneously.

B. BSNL Pensioners were accorded for approval of recommendations of 2nd P.R.C. w.e.f. 01.01.2007 at par with working employees after Cabinet Approval.

C. Accordingly, BSNL Pensioners should have been extended the benefit of Pension Revision for BSNL Pensioners w.e.f. 01.01.2017 with fixation of 15% as recommended by the 3rd P.R.C.

D. Now, the recommendations of 3rd P.R.C. are approved by the Cabinet for working employees of PSUs and the way for its Employees/Pensioners is cleared by MOC’s assurance on 24.03.2018 to AUAB. But it is inordinately delayed.

E. According to Rule 37-A, of CCS Pension) Rules 1972, sub-rule 8, which says pension/family pension shall be calculated at par with C.G. Employee retiring on superannuation. The said rule is silent about Pension revision for C.G. Employees but it is in practice in light of Constitutional Bench of Apex Court judgment delivered on 17.12.1982 in D.S. Nakara case.

G. In turn, now as per 3rd PRC recommendations; as they all governed by CCS (pension) Rules 1972 and once upon a time they were C.G. Employees and also conferred status of Govt. Pensioners on retirement, they get their Pension from C.G. i.e. DoT’; they are eligible for their Pension Revision w.e.f. 01.01.2017.

H. A clarification issued by the DoP&PW vide it’s No: 4/19/2009-P&PW (D) dated 27.3.2009 to DoT reads “BSNL is the only PSU that has been granted a special dispensation under sub-rule (21) of Rule 37-A of CCS (Pension) Rules, 1972 to the effect that the Pensionary benefits including family pension to the absorbed employees of BSNL is paid by the government. This Department is of the view that the change as per DoP&PW O.M. dated 02.09.2009 as mentioned in Para 2 above are also applicable to IDA Pensioners of BSNL.

I. All these three P.R.Cs did not have in the terms of reference any provision for pension revision as they were exclusively meant for executives. And all the PSUs have their own Pension Scheme barring BSNL Pensioners.

Read also |  Grant of disability pension to whom who were boarded out from service, with less than 10 years of qualifying service, due to an injury/disability

K. Liability of payment of pension/family pension to BSNL retirees lies squarely with Government of India as per Cabinet Decision and DoT order dated 20.07.2016 and also the BSNL has paid pension contribution in Cash to the Govt. for the period of their service in BSNL till superannuation.

L. Consequential to apex court judgment dated 03.05.1990, the DPE has issued orders saying that all employees appointed on or after 01.01.1989 in the PSEs following CDA pattern are deemed to have been appointed on IDA pattern and related scale of pay. As such, BSNL has adopted IDA Pay scales with Pensionary benefit on IDA pattern.

N. Now for obvious reasons, the Working Unions/Associations it seems influenced by the political ideology, delaying the process of Wage Revision since last three years and there is no possibility of settlement even till the end of September 2020.

O. To supplement our view, we write that as per a special provision contained in Chapter – 3 which reads as:

“Assessment and Recommendations, Para 3.2 (IV) – There are also certain CPSEs which have been formed as an independent Government company under a statute to perform specific agenda / regulatory functions. The revenue stream of such CPSEs are not linked to profits from the open market competitive scenario but are governed through the fees & charges, as prescribed and amended from time to time by the Government. There is no budgetary support provided by the Government to such CPSEs. In consideration that the impact of the revised compensation structure including Performance Related Pay) would supposedly form the part of revenue stream for such CPSEs, the Committee recommends that affordability condition shall not be applicable to these CPSEs; however the implementation of same shall be subject to the approval of Administrative Ministry upon agreeing and ensuring to incorporate the impact of the revised compensation structure into the revenue stream.”

The above provision is conditional and applicable to certain PSUs, but BSNL Unions/Associations are deliberately making movement to make the clause applicable to all the PSU which clearly indicates their motive to delay the process and create unrest amongst PSU Workers.

P. For your kind information, the BSNL Employees and Pensioners were given assurance by Hon’ble Manoj Sinha, MOSC in the meeting with All Unions/Associations on 24th March, 2018 that the DoT and ministry will move in right directions to get clearance for our Pension Revision w.e.f. 01.01.2017 implementing the 3rd P.R.C. Recommendation at the earliest.

Our submission in light of above:

1) We the BSNL Pensioners are due for our Pension Revision w.e.f. 01.01.2017 and for which there is no need to ask consent of the BSNL Corporate Office, as our Pension Contribution has already been collected by the DoT from BSNL on maximum of our Pay.

2) The DoT has taken clear stand while accepting and considering proposal of Pension Revision of BSNL Pensioners that the BSNL has no power and no legal authority to say anything in this regard. BSNL can only recommend the pay scale for its employees.

3) DoT has given green signal to BSNL Corporate Office to start negotiation with the Unions/Associations and finalize their pay revision.

4) Further, recently, in a Further Discussion on implementation of 3rd P.R.C. Recommendations for BSNL Employees Shri A.K. Sinha, DGM BSNL in a Conciliation Meeting held on 07.12.2020 by the Assistant Labour Commissioner (Central) with Unions has assured that the negotiations will start soon.

7) Even the recommendation of 3rd P.R.C. will be implemented ONLY WHEN, the DoT gives its approval for BSNL Employees considering the proposal of BSNL Corporate Office; when received.