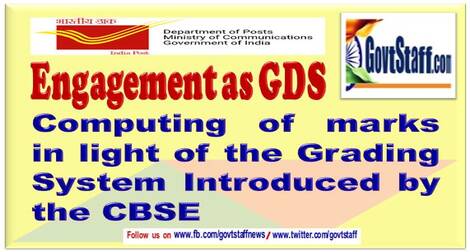 GDS : Computing of marks in light of the Grading System Introduced by the CBSE

GDS : Computing of marks in light of the Grading System Introduced by the CBSE

No. 17-16/2019-GDS
Government of India
Ministry of Communications
Department of Posts
(GDS Section)

Subject : Computing of marks for engagement as GDS in light of the Grading System Introduced by the CBSE.

The undersigned is directed to refer to DG Posts’ letter No. 17-39/2012-GDS dated 08 Jan 2014 and 21.05.2019, wherein clarification on computing of marks for engagement as GDS in light of the Grading System introduced by the CBSE was issued.

2. The Competent Authority has approved the following in supersession of all earlier instruction for selection of candidates applying for the same post of GDS, i.e. who either possess Marks, total Marks or Grading Point, the method of arriving at the total marks obtained in each of the three cases will be as follows:-

(a) For applicants with marks, the method will remain the same as is being done now 1.e. their total marks will be worked out by taking into account the marks obtained in the compulsory and elective/optional subjects (other than extra subjects, if any).

(b) For applicants having both Total Marks and Grading Point (i.e. mark list issued with total marks and grading point both), in such cases the method used will be as follows :-

“The candidate’s total marks will be worked out while ignoring the Grading Point; this methodology will ensure that candidate possessing higher marks will be selected.”

(c) For candidates having grades subject-wise, marks will be arrived for each subject (compulsory and elective subjects but not extra subjects), by applying the multiplying factor of 9.5 in the following manner:-

(d) Where Cumulative Grade Point Average (CGPA) is also provided, the marks will be arrived at by multiplying the CGPA by 9.5. Where individual grades in each subject as well as CGPA is given, the higher of the two marks will be taken. Where two or more candidates have equal marks, the candidate having the higher age (older candidate) will be selected.

(e) This criterion will be adopted in all cases where the process of drawing the select panel is not complete.

3. The contents of this letter may be circulated to all concerned for strict compliance.

4. The above instructions will come into effect from the date of issue of this order. 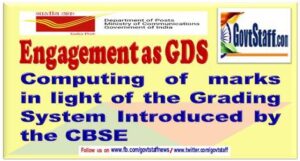