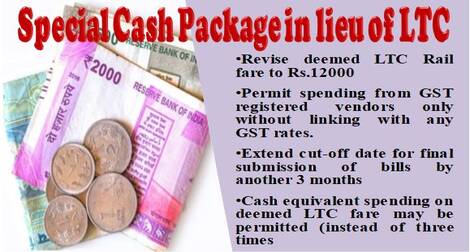 1) We wish to bring to your kind notice to some of the issues on Department of Expenditure O.M. cited in reference on Special Cash Package equivalent in lieu of LTC fare for Central Government Employees.

2) Government has issued this order with a view to compensate and incentivise consumption by Central Government employees thereby giving a boost to consumption expenditure.

3) The O.M. says that, deemed LTC fare for round trip for employees entitled to Rail fare/Air fare is allowed. The cash equivalent is allowed, if the employee spends amount equal to the value of leave encashment plus a sum three times of the value of deemed LTC fare on purchase of items or availing
services carrying GST rates not less than 12%. Payment should have been made in digital mode.

4) But, Compensation in lieu of LTC fare Rs.6000 per person for employees who are entitled to Rail fare (up to Pay Level-8) is very low. Linking the cash equivalent a sum three times of the value of deemed LTC fare with purchase or availing services carrying not less than 12% GST will be a burden for employees, since they will be required to spend three times of amount they are eligible.

5) Moreover, Benefit of giving boost to consumption expenditure through Central Government employees’ spending should not be restricted to items / services carrying not less than 12% GST. If employees are allowed to spend on items / services of their choice according to their need without linking it with any GST rates, it will result in boosting of consumption expenditure as expected by Government. Also items produced by cottage industries, many environment friendly products, items produced by micro industries, khadi industries etc will not be covered in 12% & above GST rates.

7) Employees don’t get sufficient time to purchase the items or services of their need, since many Railway Zones/Divisions issued circulars and procedure orders late.

8) It is therefore requested that,

a) Deemed LTC fare per person for employees who are entitled to Rail fare of any class may be revised to Rs.12,000.

b) Cash equivalent spending of the value of deemed LTC fare (instead of three times) may be permitted.

c) Cash equivalent spending on deemed LTC fare may be permitted with GST registered vendors without linking it with any GST rates.

d) Cut-off date for final submission of bills 31st March 2021 may please be extended by another 3 months. 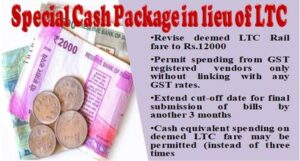