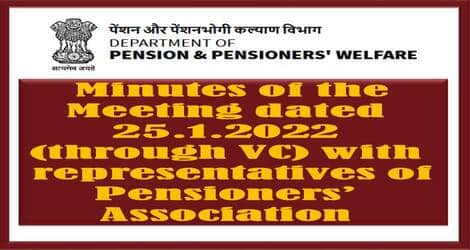 Minutes of the Virtual Meeting dated 25.01.2022 with Pensioners Association: DoPPW

Minutes of the Virtual Meeting dated 25.01.2022 with Pensioners Association: DoPPW

Sub: Minutes of the Meeting dated 25.1.2022 (through VC) with representatives of Pensioners’ Association under the Chairmanship of Secretary (Pension & Pensioners’ Welfare)

The undersigned is directed to forward a copy of minutes of the meeting held on 25.1.2022 (through VC) with representatives of Pensioners’ Association under the Chairmanship of Secretary (Pension & Pensioners’ Welfare)

2. This issue with the approval of Secretary (Pension)

All participants of the meeting.

Copy for information to:

Minutes of the Meeting dated 25.01.2022 (through VC) with representatives of Pensioners’ Associations under the Chairmanship of Secretary (Pension & Pensioners’ Welfare)

A meeting was held with the representatives of Pensioners Associations under the Chairmanship of Secretary (Pensions & Pensioners’ Welfare) on 25th January, 2022 through Video Conferencing (VC). The objective of the VC was to create awareness on newly notified CCS (Pension) Rules, 2021 and generation of Digital Life Certificates (DLC) using Face Authentication Technology as well as an interaction with the Pensioners’ Associations. Presentations followed by Q&A session were conducted on the CCS (Pension) Rules, 2021 and Face Authentication Technology.

2. The meeting commenced with the welcome of Shri V. Srinivas, Secretary (Pensions and Pensioners Welfare), Sh S N Mathur, JS, Pension and all representatives from pensioner associations by the coordinator.

3. Shri. Sanjiv N Mathur, Joint Secretary (Pensions) , welcomed Shri V. Srinivas, Secretary (Pensions and Pensioners Welfare) and the Pensioners Associations. He informed that this initiative of a Pensioners Awareness Program had been started after a long gap and it was being conducted for the first time on a digital platform across the entire country covering cities from Kanya Kumari to Jammu which included Vadodara, Jammu, Ranchi, Nagpur, Bhubaneshwar, Jaipur, Uttarapara, Bangalore, Pune, Guwahati, Puducherry, Mumbai, Ambarnath, KanyaKumari, Madurai, Kolkata, Mohali, Noida, Delhi, Ahmedabad and Mysuru. He stressed the importance of this awareness meeting in view of the fact that CCS (Pension) Rules, 2021 had been notified and a briefing of the various aspects was required. Further, the department had launched the Face Authentication Technology for DLC generation and date of LC submission had been extended to 2sth February, 2022.

The presentation and question Answer sessions were followed by an address by Secretary (P&PW).

Secretary (P&PW) informed that this was his second meeting with Pensioners’ Associations after he taking charge as Secretary (P&PW) and he was very happy to meet the associations. He further informed that he would ensure such interaction on a regular basis, at least once a month for free flow of information and also that the Pensions Department, being a very nimble department was in regular touch with the Associations through WhatsApp group created for this purpose. He appreciated the intensity of the discussion and the various queries raised, given the release of CCS Pension Rules 2021 on 25th December 2021 and the recent launch of DLC generation through face authentication . The curiosity among pensioners is very understandable and such interactions would continue with a view to stay in touch and ensure that every association reached out to. He also requested each Association to have regular interactions with their membership.

He expressed his happiness to meet such a large group of 52 participants from the various Associations and have a constructive interaction. He assured that he would try to schedule a specific date every month for such an interaction comprising of constructive dialogue and better understanding to take matters forward.

Read also |  KVS: Timely disbursement of additional pension to pensioners / family pensioners of KVS on attaining the age of 80 years and above

He referred to the presentations and showed pleasure that queries raised could be answered . He informed that since the pension department is a very legalistic and policy based department, it is important to understand where reforms are necessary and constant updations and amendments in law may be required to ensure greater benefits given to pensioners and that will be the objective of the entire exercise. He concluded by informing that another such meeting will be held in February and conveyed his best wishes and greetings for Republic Day to all the participants.