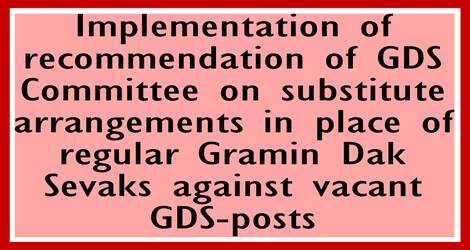 3. Substitute arrangement/ engagement for the GDS posts lying vacant due to
deputation of regular incumbent GDS to IPPB/APS:

4. The following needs to be adhered to while arranging a substitute in place of vacant GDS post:

5. While arranging for combined duty or substitutes, the engaging authority shall ensure that required user ID/password, enabled/configured RICT device etc are provided from the day one of such arrangement so that work loss for such vacant posts may be avoided.

7. If any previous instructions on the issues of ‘substitute’ arrangement are found contrary to above instruction/guideline, the same will stand superseded by this O.M.