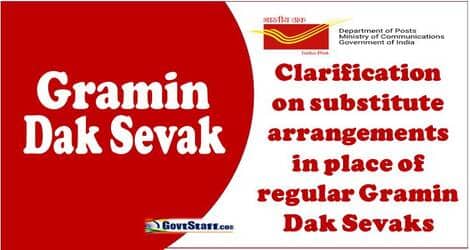 Several references have been received from staff side in connection with OM of even number dated 11.02.2022 wherein consolidated instructions on substitute arrangement in place of regular Garmin Dak Sevaks, against vacant GDS posts were circulated.

2. The following specific issues have been raised:-

(i) While providing substitute arrangement In a BO, combining duties of GDS brings practical difficulties such as distance between two BOs, workload of the GDS who Is being assigned combination of duties.

(ii) The work of BOs Is being hampered due to the instant Instructions wherein it has been specified that substitute should not be engaged against a short-term vacancy in any GDS posts in routine manner for period of less than 45 days.

(iii) Where have been instances where leave has been denied to a GDS.

3. In view of the Issues reported as above, there seems to be some confusion or misinterpretation of the said OM in the field units. Accordingly, the following are clarified:

i. The said OM dated 11.02.2022 has provided for ‘combination of duties in same office’. Therefore, issue of distance between two BOs does not arise. The said OM has merely provided for procedure to be followed in case a GDS post falls vacant (short term or long term). Workload etc shall be considered while deciding upon combination of duties or arrangement of ‘substitute’.

ii. The said OM does not impose any ban on providing ‘substitute’ against short term or long term vacancies. As stated in para 3 (i) above, the prescribed procedure shall be followed.

iii. Leave to any GDS shall not be denied solely on the ground that substitute is not justified for being provided during the leave.

This Issues with the approval of the Competent Authority.