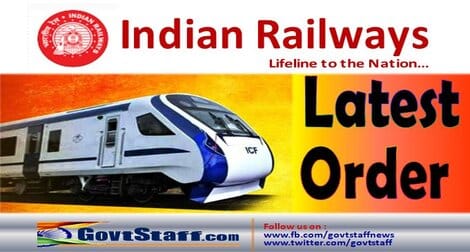 Ministry of Railways vide its letter under reference has circulated the salient points of various instructions on improving the efficiency and strengthening of administrative machinery at all levels by the Govt. by exercise of its powers under Rule 1802(a)/ 1803(a)/ 1804(a) – R.II, 1987 edition read with Rule 66(b) of RSPR, 1993 edition, to retire a Railway servant in public interest before the normal date of his retirement subject to fulfillment of conditions laid down in the instructions.

2. Board has considered and decided to update these instructions. The updated salient points are enclosed for reference. This summary, however, must be read with all the relevant instructions on the subject.

1. With a view to improving efficiency and strengthening administrative machinery at all levels, Government has the absolute power under Rule 1802(a), 1803(a), 1804(a) of !REC Vol-II 1987 edition and Rule 66(b) of RSPR 1993 edition to retire a Railway employee in public interest, before his normal date of retirement, on attaining a specified age or on completing a specific length of service on the grounds of (i) inefficiency/ ineffectiveness, or (ii) doubtful integrity, or (iii) for conduct unbecoming of a Railway Servant. Criteria and procedure have been laid down to ensure that power is exercised fairly and impartially and not arbitrarily.

2. Instructions in this regard have been circulated from time to time, both by Department of Personnel and Training (DoP&T) and the Ministry of Railways (Railway Board). The following codal provisions and instructions contain all the relevant instructions on the subject.

3. An attempt has been made to bring the main elements of these instructions together in one document. However, this is only to improve clarity and understanding. This summary has to be read with all relevant instructions already issued on the subject.

4. Criteria for review of Services:

(a) Age and Service rendered:

(iv) Group C: After completion of 30 years of service, if not governed by any pension rules, under Rule 1804(a).

The entire service records should be considered in every review. Based on the service records, a comprehensive brief is to be prepared for consideration of the ‘Review Committee’. ‘Service records’ would take into account the following:

(i) ACR/APAR dossiers;
(ii) Personal file;
(iii) Work and performance of the officer to be assessed by looking into the files dealt with by him or in any papers or reports prepared and submitted by him;
(iv) Un-communicated remarks in ACRs/APARs may be taken into consideration;
(v) If the officer was promoted during the last 5 years (on the basis of seniority-cum-fitness and not on the basis of merit), the previous entries in the ACRs may be taken into account.
(Reference: E(P&A)I-2015/RT/38 dated 10/12.11.2015)

(i) No employee should ordinarily be retired on grounds of ineffectiveness if his/ her service during the preceding 5 years or where he/she has been promoted to a higher post during that 5 year period, his/her service in the highest post, has been found satisfactory.

(ii) There is no such stipulation if the employee is to be retired on grounds of doubtful integrity.

(iii) No employee should be ordinarily retired on ground of ineffectiveness, if in any event, he/she would be retiring on superannuation within a period of one year from the date of consideration of his/her case. However, if there is a ‘sudden and steep fall in competence, efficiency or effectiveness of an officer’, it would be open to review his case for premature retirement. This condition is not relevant in cases of doubtful integrity.

Read also |  COVID-19: Engagement of Medical Practitioners (CMPs) in Railways over and above the vacancy to contain the spread of Pandemic

(i) Actions or decision taken by the employee which do not appear to be above board, complaints received against him or suspicious property transactions, for which there may not be sufficient evidence to initiate departmental proceedings, may be taken into account for prematurely retiring an employee.

(e) Conduct unbecoming of a Government Servant as basis for Compulsory Retirement:

(f) There is also no bar on the Government to review any such case again where it was decided earlier to retain the officer, but the Appropriate/ Appointing Authority is of the opinion that it is expedient to undertake the review again on account of changed circumstances, in public interest. In such cases, the Appropriate Authority is expected to demonstrate visible meticulousness as such Government servants have been found effective on earlier occasion for retention in service.

A. Cases of Railway Servants to be reviewed 6 months before attaining the age of 50155 years or on completion of 30 years of service/ 30 years of qualifying service, whichever occurs earlier.

B. No show-cause notice need be issued to any government servant before a notice of retirement is issued to him under these rules.

C. Internal Committees may be constituted to assist the Review Committees in reviewing the cases. The Committees would ensure that service records of the employee being reviewed, along with summary bringing out all relevant information, is submitted to the Cadre Authorities at least 3 months in advance before the due date of review.

D. Composition of the Review Committee will be as under:

D.(I) For ACC Appointees and non-ACC Appointees (i.e., all Group A Gazetted officers including those of RBSS, RBSSS and Miscellaneous/ ex-cadres):

The Committee will be headed by CRB & CEO and would comprise of the functional Board Member of the Department (to which the officer, whose service is being reviewed belongs) and Member (Infra). In case, the officer being reviewed belongs to!RPS, IRHS, RBSS or from other Miscellaneous Cadres, Member (Traction & Rolling Stock) in addition to Member (Infra) would form part of the Committee. In respect of Group ‘A’ Railway Officers belonging to IRSE and IRSSE cadres, the Committee shall comprise of CRB & CEO, Member (Infra) and Member (O&BD).

PED/Vigilance (as CVO of the Ministry) is to be associated in the said review.

Internal Committee to assist the Review Committee will be headed by Secretary, Railway Board and would comprise of JS(Confidential) and JS(Establishment) as Members. ED/Vigilance concerned (or Director/Vigilance in case there is no ED available) shall be associated.

DV(Intelligence) is to be associated in the said review.

Internal Committee to assist the Review Committee would be headed by JS(C) and would comprise Director(GA) and Dir(E) as members. A JAG/ SG officer from Vig. Dte. recommended by PED/ Vig. shall be associated.

D.(III) For non-Gazetted officials of Railway Board including those of RBSS, RBSSS and Miscellaneous/ ex-cadres:

DV(Intelligence) is to be associated ·with the said review.

Internal Committee to assist the Review Committee to comprise Dir (A) and Director (GA). A JAG/ SG officer from Vig. Dte. recommended by PED/ Vig. shall be associated.”

D.(IV) For Group B officers/ officials in Railways:

SDGM of the Railway is to be associated with the said review.

D.(V) For Group C officials in Railways: The following are the instructions issued by Board. However, the General Managers, may make any modification which they deem fit in administrative interest. Composition of the Internal Committees may also be decided by the respective General Managers of the Railways and in respect of RDSO and NAIR, the respective DGs can constitute the Committees.

(a) At Head Quarter Level:

(i) For non-Personnel officials:

PROD or GM where he is appointing authority as Chairman, PCPO.

PCPO to be Chainnan. GM to nominate an SAG Officer to be member.
If GM is Chahman, he may nominate a PHOD as a member.

Additional PHOD may act as Chairman if he is higher m rank than that of appointing authority.

SDGM/Dy GM who is in charge of the Vigilance Department shall be associated as a Third Member of the Committee.

(b) At Division Level:

(i) For non-Personnel Br. officials:

Where DRM is the ‘appointing’ authority, Committee will consist of ADRM as Chai1man, Sr. DPO/SPO and another JAG officer as members

Board have decided that the officer nominated as member of the Committee may be from the same division, but should not be amongst those who exercise direct/ immediate control or supervision over the officers being screened. Committees should be constituted in such a manner so as to ensure that there is an element of fairness in the review and there is no claim of arbitrariness of action by the employee. In cases of doubtful integrity, since all records are available only with the SDGM/CVO of the Reviewing Organisation, he will continue to be associated with it.

D.(VI) For all Railway Servants in Group A and B service/post in Railway Recruitment Boards, NAIR and Centralised Training Institutes, review will be done in Board’s office. Following procedure is to be followed:

(a) List of Group A and B officers who come under review to be prepared sufficiently in advance, ensuring that there are no omissions.
(b) The confidential reports/ files of officers whose confidential reports are not maintained in Boru·d’s office and whose cases are to be reviewed should be brought up to date in all respects and sent to Secretary Railway Boru·d along with the above list through a responsible member of the staff. Quarterly time table has been prescribed vide DoP&T’s circular dated 21.03.2014 mentioned at para 2 of page 1 of Salient points.)
(Reference: E(O)I-69 SR 10/13 dated 12.12.1969)

E) Complete bio-data particulars of the employee who is to be reviewed should be circulated to the members of the Review/ Representation Committees as per the prescribed proforma (Annexure to this letter). Proforma is to be carefully and meticulously filled and should be free from all e1TOrs. Findings of Review/ Representation Committees/SDGMs in ‘doubtful integrity’ cases should be entered in the proforma itself.

F) Rules relating to premature retirement should not be used:

i. To retire on ground of specific misconduct as a short-cut to initiating formal disciplinary proceedings. (CAT/PB/New Delhi in O.A No. 1827/2017, in the matter of Sangeeta Rao vs. UOI vide order dated 18.09.2018, dismissed the plea of the government servant who was compulsorily retired under 56(J) for habitual late coming); or

ii. For reduction of surplus staff on ground of effecting general economy without following rules of retrenchment.

G) Any adverse entries made in the confidential record shall be taken note of and be given due weightage in passing such order.

H) Even uncommunicated entries in the confidential record may be taken into consideration.

J) Once a decision has been taken by appropriate authority to retain an employee beyond the age of 50 years after review, he would ordinarily continue in service till he attains the age of retirement. If however, the appropriate authority considers at any time after review that retention would not be in public interest, that authority may take necessary action to retire the employee as per the laid down procedure.

K) If the ‘appropriate authority’ decides to differ with the recommendation of the Review Committee, he may remit the papers to the next higher authority for a final decision.

L) A notice longer than 3 months can be given, but the date from which he is required to retire as specified in the notice should not be before he attains the age of 50155 years or before be completes 30 years of service.

M) While computing the notice period of ‘not less than 3 months’, the date of service of notice and the date of expiry shall be excluded. The date of premature retirement should be on the forenoon of the day (which should be treated as a non-working day) following the day of expiry of the notice.