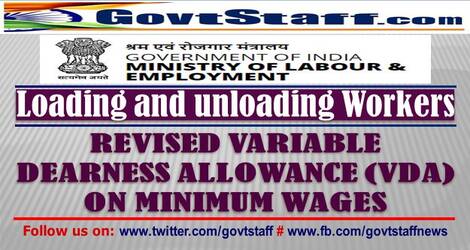 In Exercise of the powers conferred by Central Government vide Notification No. S.O. 192(E), dated 19th January, 2017, of the Ministry of Labour & Employment the undersigned, hereby revises the rates of Variable Dearness Allowance on the basis of the average Consumer Price Index number for the preceding period of six month ending on 31.12.2021 reaching 124. 18 from 119.86 as on 31.12.2021 (Base Year 2016-100) and thereby resulting in an increase of 4.32 points. The revised Variable Dearness Allowance as under shall be payable from 01.4.2022:-

Therefore, the minimum rates of wages including the basic rates and Variable Dearness Allowance payable w.e.f. 01.04.2022 to the employees shall be as under:-

Therefore the minimum rates of wages showing the basic rates and variable Dearness Allowance payable w.e.f. 01.04.2021 shall be as under:-

Wages 14
Newer Post
Payment of IDA increase to the Non-Executive of BSNL – Initiation of contempt of Court proceeding against the CMD BSNL due to non-implementation of the order of the Hon’ble Kerala High Court
Older Post
Revised rates of VDA for employees employed in Watch and Ward Duties with and without Arms w.e.f. 01st April, 2022