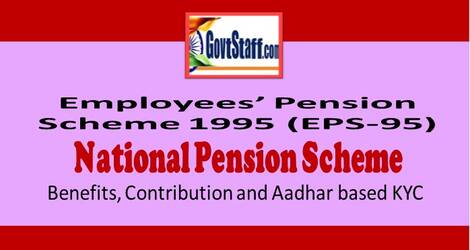 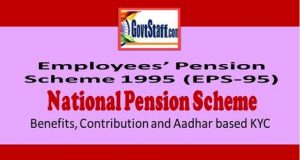 Ministry of Finance
Department of Expenditure

Will the Minister of FINANCE be pleased to state:-

(a) whether the pensioners of Employees” Pension Scheme 1995 (EPS-95) are being provided the facility of new pension at present;

(b) the details of the percentage of monthly contributions of Government in National Pension Scheme (NPS) for all the employees of Union Government;

(c) the details of the percentage of monthly contribution in the NPS by the Government for all the employees of Central autonomous bodies under various central Ministries;

(d) the appropriate steps taken by the Government to provide suitable pension and other facilities to the pensioners under EPS-95; and

(e) whether the Government is considering to make NPS easier and if so, the details thereof and if not, the reasons therefor?

(a) The Employees’ Pension Scheme (EPS), 1995 is a ‘Defined Contribution-Defined Benefit’ Social Security Scheme managed by the Ministry of Labour and Employment. The corpus of the Employees’ Pension Fund is made up of (i) contribution by the employer @ 8.33 per cent of wages; and (ii) contribution from Central Government through budgetary support @ 1.16 per cent of wages up to an amount of Rs.15,000/- per month. All benefits under the scheme are paid out of such accumulations. The fund is valued annually as mandated under paragraph 32 of the EPS, 1995 and as per the valuation of the fund as on 31.03.2019, there is an actuarial deficit.

Amount of member’s pension under the Scheme is determined taking into account the pensionable period of service and pensionable salary as per following formula:

However, the Government, for the first time, in the year 2014, provided a minimum pension of Rs. 1,000/- per month to the pensioners under the EPS, 1995 by providing budgetary support, which was in addition to the budgetary support of 1.16% of wages provided annually towards EPS to Employees’ Provident Fund Organisation (EPFO).

Further, National Pension System (NPS) is a contributory pension system which was introduced by the Government of India to replace the defined benefit pension system (Old Pension Scheme), vide notification number F. No.5/7/2003-ECB&PR, dated 22nd December, 2003. The NPS is administered under the PFRDA Act, 2013. NPS was made mandatory for all new recruits to the Central Government service from 1st January, 2004, (except the armed forces). This has also been rolled out for all citizens (resident or non-resident) aged between 18 and 70 years with effect from 1st May, 2009, on voluntary basis.

View :  Payment of lump sum compensation to employees covered under NPS on retention in Railway service - RBE No. 10/2021

(d) Earlier there was no provision under EPS, 1995 for restoration of normal pension after commutation. However, the Government vide G.S.R. 132 (E) dated 20.02.2020 notified decision for restoration of normal pension after completion of fifteen years from the date of such commutation in respect of those members who availed the benefit of commutation of pension under the erstwhile paragraph 12A of the EPS, 1995, on or before 25.09.2008.

(e) Government of India has taken a number of steps for streamlining NPS for Central Government employees. These include enhancement of Government’s contribution from the earlier 10% of Pay + DA to 14% of Pay + DA, freedom of choice for selection of Pension Funds and pattern of investment to subscribers, payment of compensation for non-deposit or delayed deposit of NPS contributions for any period during 2004-2012, tax exemption under Section 80C of the Income Tax Act, 1961, and increase in tax exemption limit for lump sum withdrawal on exit from earlier 40% to 60% of the amount due, making the entire withdrawal exempt from income tax. The contribution by the Government employees under Tier-II of NPS is covered under Section 80C of the Income Tax Act, 1961, for deduction up to Rs. 1.50 lakh for the purpose of income tax, provided that there is a lock-in period of 3 years.

Further, Pension Fund Regulatory and Development Authority (PFRDA) is making constant efforts to make on-boarding of NPS subscribers, for all transactional activities under NPS including Exit from the system upon superannuation, an easier and comfortable experience through digitization of the activities like Direct Remittance (D-Remit) Facility for ease of contributions by the NPS subscribers, OTP based authentication to provide paperless on boarding experience, Offline Aadhar based KYC and regularly conducting Annuity Literacy Programs to create awareness of exit process and annuity schemes.