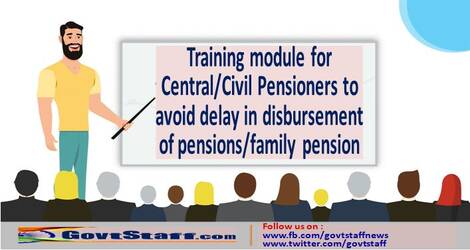 Training module for Central/Civil Pensioners to avoid delay in disbursement of pensions/family pension.

Training module for Central/Civil Pensioners to avoid delay in disbursement of pensions/family pension.

It is suggested that regular training be conducted for fresh recruits at induction level. Training must also be conducted for managerial level periodically. Special training be organised for Personnel Managers and CPPCs. A separate link has been created on our Departmental website www.persmin.nic.in which carries some of the most important orders which must be known by all personnel dealing with pension matters.

Induction training– This module has been developed for training paying Bank Branch officials dealing with pension matters to ensure that there are no delay in disbursement of pensions/family pension.

Sensitisation – The officers need to be properly sensitised about their role and to appreciate the special need of senior citizens. This will bring about a change in mindset so that the difficulties being faced by pensioners may be minimised and handled appropriately.

Special category – The officers posted at the CPPC should be given specialised training for the disbursement of pensions/family pension. The role of CPPC is vital in the process of pension. Issues like implementation of e-PPO, e-Scrolls may be deliberated. Good practices of different CPPCs may be replicated.

I. Training Module for Paying Branches

Paying Branches would need to segregate pensioners belonging to Central Civil, Defence, Railways, P&T and State Governments Pensioners. The detailed provisions which must be covered are as follows. Banks may add to these as necessary.

CCS Pension Rules – Rule 51 -Persons to whom gratuity is payable

** These circulars are available at www.persmin.nic.in

An institutional mechanism may be put in place to ensure that the Managers of the paying branches do not refer the pensioners to CPPC and resolve the issues upfront at their level.

Detailed instructions on CPPC functioning may be obtained for CPAO.