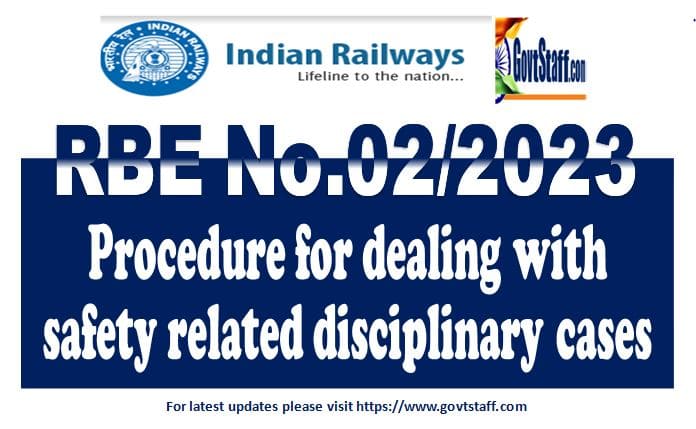 The General Managers
All Indian Railways and Production Units etc.
(As per standard list)

Attention is invited to instructions issued by Railway Board under letter no. E(D&A) 2003 RG6-5 dated 19.02.2003 RBE No. 36/2003 on the subject matter. As a period of two decades have passed, it has been considered necessary that these instructions be reiterated for ensuring strict compliance thereof. Accordingly, all Zonal Railways/Production Units etc. are advised to ensure that contents of the aforesaid instructions dated 19.02.2003 are scrupulously adhered to in safety related disciplinary cases. A copy of the aforementioned RBE No. 36/2003 is enclosed herewith for ready reference.

The General Manager(P)
All Indian Railways and
Production Units etc.
(As per Standard list)

Board have considered the matter in detail and have observed that there is an urgent need to empower the Safety department so that the disciplinary cases of Railway Servants found guilty of causing accidents or violating safety norms/rules related to maintenance and operation not necessarily leading to accidents are properly dealt with. Board have therefore decided that in such disciplinary cases, the following procedure should be adopted :

View :  AILTC: Clarification regarding return journey - Railway Servants can perform return journey in the next Calendar Year while availing AILTC - RBE No. 152/2022

These instructions should be widely oirc:ulated for strict compliance.