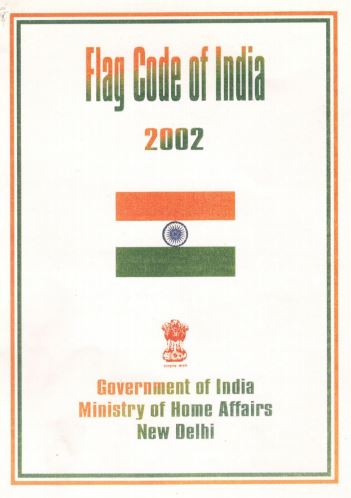 Strict compliance of the provisions of Flag Code of India, 2002 and the Prevention of Insults to National Honour Act, 197 1-Advisory.

I am directed to Say that the Indian National Flag represents hopes and aspirations of the people of our country and hence should Occupy a position of honour. There is universal affection and respect for, and loyalty to, the National flag. Yet, a perceptible lack of awareness is often noticed amongst people as well as organizations/agencies of the Government, in regard to laws, practices and conventions that apply to display of the National Flag. A copy each of ‘The Prevention of Insults to national Honour Act, 1971’ and Flag Code of India, 2002′ which governs display of National Flag, are enclosed herewith for strict compliance of the provisions contained in the Act and the Flag Code (copy also available on this Ministry’s website www.mha.gov.in). You are requested to undertake Mass awareness programme in this regard and also to give it wide publicity through advertisements in the electronic and print media.