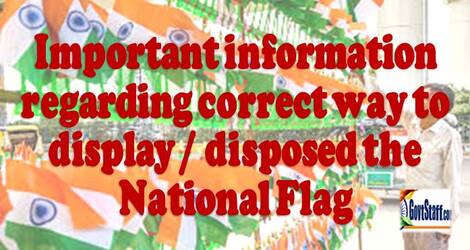 a. The flag Code of India, 2002 was amended vide Order dated 30th December, 2021 and National Flag made of polyester or machine made Flag have been allowed. Now, the National Flag shall be made of hand spun and hand woven or machine made, cotton/polyester/wool/silk khadi bunting.

b. A member of public, a private organization or an educational institution may hoist/display the National Flag on all days and occasions, ceremonial or otherwise, consistent with the dignity and honour of the National Flag.

“where the Flag is displayed in open or displayed on the house of a member of public, it may be flown day and night”

d. The National Flag shall be rectangular in shape. The Flag can be of any size but the ratio of the length to the height (width) of the Flag shall be 3:2.

e. Whenever the National Flag is displayed, it should occupy the position of honour and should be distinctly placed.

f. A damaged or dishevelled Flag shall not be displayed.

g. The flag should not be flown from a single masthead simultaneously with any other flag or flags.

h. The Flag should not be flown on any vehicle except of the dignitaries
mentioned in Section IX of Part Ill of the Flag Code, such as President,
Vice-President, Prime-Minister, Governors etc.

i. No other flag or bunting should be placed higher than or above or side with the National Flag

To avoid incorrect display of the National Flag

View :  Paid Holiday to employees on the day of poll on 12-11-2022 due to General Election to the Legislative Assembly of Himachal Pradesh