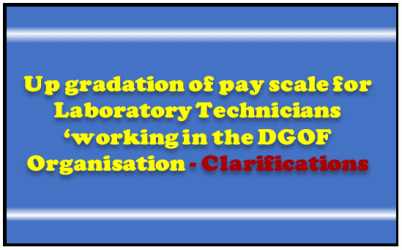 No. 50(50)2018-D(Estt/NG)
MINISTRY OF DEFENCE
DEPARTMENT OF DEFENCE PRODUCTION
D(Estt/NG)/Sena-Bhawan

Subject: Up gradation of pay scale for Laboratory Technicians ‘working in the DGOF Organisation- Clarifications regarding

2. Clarification/ comments with regard to (i) the review of ACP/MACP benefits for awarding Grade Pay Rs. 4600 to Laboratory Technicians in OFB Hospitals who has already been awarded ACP-I in the scale of Rs. 5000-8000 corresponding to Grade Pay Rs. 4200 and (ii) grant of Upgraded Pay to Laboratory Technicians who do not possess qualification as per RRs of 2005 have been examined in this Department in consultation with DoP&T and Department of Expenditure, Ministry of Finance. The clarifications in this respect as provided by the DOPT & concurred in by Department of Expenditure, Ministry of Finance are as follows

(Manisha Bhatnagar)
Deputy Secretary to the Govt. of India