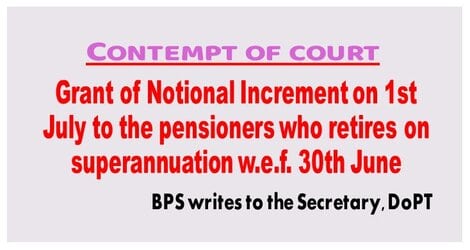 Grant of Notional Increment on 1st July to the pensioners who retires on superannuation w.e.f. 30th June – Contempt of Court: BPS writes to Secretary, DOPT

Grant of Notional Increment on 1st July to the pensioners who retires on superannuation w.e.f. 30th June – Contempt of Court: BPS writes to Secretary, DOPT

2 a) Subsequently 3rd CPC recommendation was accepted by the Government of India Based on the accepted recommendation, the then Department of Administrative Reforms (now DOPT), issued orders on the 24th November, 1973 laying down that the Government servants shall retire from service with effect from the afternoon of the last day of the month in which their date of retirement fell.

Read also |  RBE No. 73/2020 - Grant of disability pension with less than 10 years of qualifying service, due to an injury/disability

2 b) Clarificatory OM dated 29th June, 1974 was issued without the approval of the concerned State Minister, that all those born on the 1st would retire in the afternoon of the last day of the previous month.Accordingly FR56(a) created.

3. Consequently, those born on the 1st Jan, 1928/1938/1946/1956, were deprived of the benefits of the 4th/5th/6th/7th CPC respectively. However, those who could knock the door of the court got favorable judgements. Annexure2 gives the details of court cases with positive outcome.
Latest in the series is the case of Union Of India vs M L. Punshi & Am; IN THE HIGH COURT OF DELHI AT NEW DELHI in WP (C) No. 288512000 on the 191hJuly, 2010. In this case the court did not agree with the contention of the Union of India and observed  “In short, we are of the view that in the present cases the effective date of retirement would be 01.04.1995 and not 31.03.1995.” SLP filed by the Government against order of the High Court was dismissed by the Supreme Court.

4. In the case of lnder Pal Yadav Vs Union of lndia [ l985(2) SCC 648), in SLP-IA No. 77457/2017 dated 01.09.2017, in the Civil Appeal No. 3744 of 2016 UOI Vs Balbir Singh Tur & Anr dated 08.12.2017 and UOI VS Prithvi singh dated 24.4.2018 the Hon’ble Supreme Court observed that “We find that there are several matters in which the aggrieved employees have been going to the Tribunal, then to the High Court and thereafter those matters are brought before this Court. Once the question, in principle, has been settled, it is only appropriate on the part of the Government of India to issue a circular so that people need not unnecessarily travel either to the Tribunal or the High Court or this Court and it will save the time of the Court and the Administrative Departments apart from avoiding unnecessary and avoidable expenditure”.

5. The DOPT, has not so far honoured the supreme court pronouncement referred to above , consequently it has rendered itself liable to be taken-up for contempt of the court, as well as for putting lot of retirees(Sr Citizens) to financial loss. DOPT, contrary to the observation of the Supreme Court is forcing Pensioners who are in the evening of their lives to knock the doors of CAT, High court/Supreme court. Presently quite a number of cases filed by pensioners born on the 1st January,/ 30th of June are pending in the courts.

6. Kindly look into and ensure that the pronouncement of the Supreme court as brought out in foregoing line is implemented in letter & spirit so that that thousands of aggrieved who do not have means to approach the courts are not deprived of their legitimate dues.

7. A detailed background note is annexed.