Sub: Scrapping of National Pension System and extending coverage of the Old Pension scheme under CCS (Pension) Rules – 1972 for appointees on or after 01/01/2004.

In response to the representation dated 07/03/2020, submitted to your honour on behalf of the Staff side of the National Council JCM, the Ministry of Finance vide its letter dated 15/09/2020 have forwarded a reply to this office. It is unfortunate that the issues raised by us in our letter dated 07/03/2020 was not addressed rather the Ministry of Finance has simply reiterated its earlier position of continuing the NPS. You will appreciate that when the NPS was introduced by the Government during 2003 making it effective from 01/01/2004, the Staff Side of the National Council (JCM) have protested against this arbitrary decision of the Government, since it takes away the Pension rights of the Central Govt. Employees., and it also discriminates the Central Govt. Employees. The issue was raised by us in different meetings of the National Council (JCM) including in the Standing Committee and the Govt. gave a commitment to the Staff Side that the Pension payable to the NPS Employees would not be less than Pension equal to 50% of the lust pay drawn, payable under the CCS (Pension) Rules 1972.

Read also |  Pension: Regulation of Pension and other Retirement benefits when government servant were on E.O.L/ Unauthorized absence or suspension as on 01.01.2016 - DoP&PW Clarification

However this office is regularly getting complaints from those employees who have retired from NPS Scheme, that they are not getting Pension under the NPS not more than Rs.3000 t0 Rs.4000/-, Under the Provision of CCS (Pension) Rules 1972, the minimum Pension after 7th CPC is Rs. 9000/- + DA, where as in NPS there is no provision of DA on the Basic Pension.

In view of the above we once again draw your attention to the Hon’ble Supreme Court Judgment, which has analyzed in detail the entire issue of Pension to the Govt. Employees and observed as follows”:

“From the discussions 3 things emerge-

(i) That pension is neither a bounty nor a matter of grave depending upon the sweet will of the employer and that it creates a vested rights subject to 1972 Rules, which are statutory in character, because they are enacted in exercise of powers conferred by the proviso to Article 309 and Clause (5) of Article 148 of the Constitution,

(ii) That pension is not an ex-gratia payment, but it is a payment for the past service rendered and

(iii) It is social welfare measure rendering socio-economic justice to those who in the heyday of their life ceaselessly toiled for the employer on an assurance that in their old age they would nor be left in the lurch.”

Since the NPS has completely defeated the social security and old age protection of the employees recruited after 01/01 2004, there is no justification to continue the existing NPS, since there is no guarantee for a minimum Defined Pension and it ts also discriminatory, since the Armed Forces Personnel are exempted from the NPS. We therefore suggest the following for your favorable consideration please.

We therefore once again request your honour to consider the above suggestions of ours in its true perspective and arrange for a meeting with the Staff side, so that we will be able to effectively place our views before your honour.

Awaiting for a favorable response. 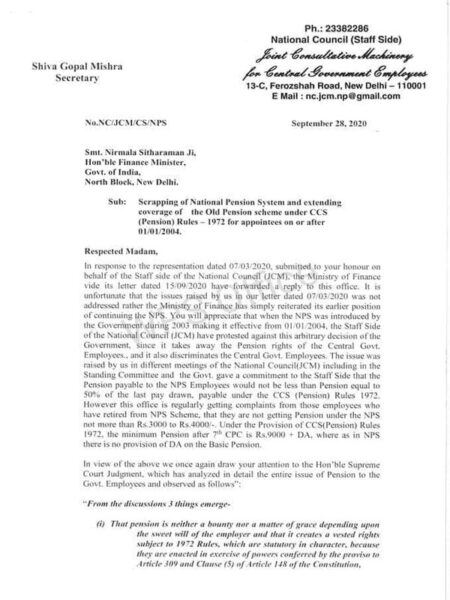