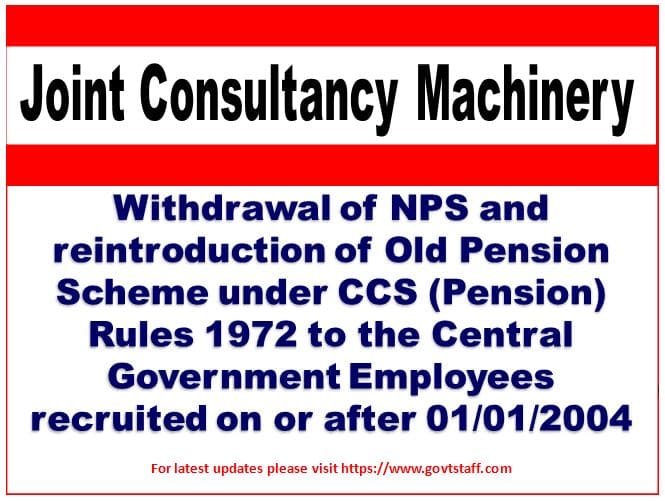 Reintroduction of Old Pension Scheme under CCS (Pension) Rules 1972 for the CG Employees recruited on or after 01.01.2002 – NC-JCM (Staff side) writes to Cabinet Secretary

Reintroduction of Old Pension Scheme under CCS (Pension) Rules 1972 for the CG Employees recruited on or after 01.01.2002 – NC-JCM (Staff side) writes to Cabinet Secretary

Sub: Withdrawal of NPS and reintroduction of Old Pension Scheme under CCS (Pension) Rules 1972 to the Central Government Employees recruited on or after 01/01/2004.

The entire Central Government Employees including para Military Personnel are opposing the no guaranteed National Pension System (NPS) and are demanding to the Government to scrap the NPS and to restore the Old Pension Scheme under CCS (Pension) Rules 1972 (at present CCS (Pension) Rules 2021). The Staff Side of the National Council JCM having realized the ill effect of the NPS have opposed the same and in all the National Council-JCM meetings and Standing Committee meetings have demanded for scraping/withdrawal of the NPS and to restore back the old Pension Scheme for those employees who were recruited on or after 01/01/2004. In the last Standing Committee meeting of the National Council – JCM meeting held on 22/09/2022 the Staff Side have once again requested the Government to withdraw the NPS and to restore the Old Pension Scheme considering the discontentment amongst the employees including para military forces and also the fact that four State Governments have already withdrawn NPS and restore the Old Pension Scheme for their employees.

View :  PFRDA Circular: Choice for NPS Subscribers to have physical or ePRAN card

Here we would like to draw your attention to the assurance given by the Government to the Staff Side in the Standing Committee meeting held on 14th December 2007. The extract from the minutes of the meeting is given below for your kind ready reference

“For employees who had entered w.e.f. 01.01.2004 are not likely to be worse off vis-à-vis the current Pension system in force, as the replacement rate would match to the present one. Thus, NPS is a win-win situation for employees and the Government.”

It is now 18 years after the implementation of NPS. Employees who were recruited on or after 01/01/2004 have now started retiring from service.
From the paltry amount they are now getting as pension from NPS it is proved that it is a disaster for the retiring employees in their old age and not a win-win situation. To prove this fact we are giving the examples of a few employees who recently retired from one of the Defence Establishment in the following Chart:-

From the above table it is amply clear that the NPS employees despite their contribution of 10% of their wages every month for their entire service is getting only a very meager pension and are worse off vis-à-vis the old Pension System. The pension under NPS remain static and there is no Dearness Relief to compensate the price rise /inflation as available in the Old Pension Scheme.

Apart from the above there are other benefits in the Old Pension Scheme such as 40% computation, restoration of the computed pension after 15 years, 20% increase in the Pension after 80 years of age and 100% pension at the age of 100 years. None of these benefits are available in the NPS. Therefore it is now proved beyond doubt that NPS is a disaster and not a beneficial Pension Scheme for the Government Employees who serve the Nation with dedication and commitment. Considering these facts West Bengal Government has never introduced NPS at all. Recently four State Governments i. e. Rajasthan, Punjab, Chattishgarh and Jharkhand have already taken decision to withdraw NPS and restore Old Pension Scheme to their employees. Other State Governments are also actively considering to scrap NPS and to restore Old Pension Scheme.

In view of the above since it is proved beyond doubt that the NPS is not going to protect the old age life of the Government employees it is prudent that the Cabinet Secretary as the Chairman of the National Council – JCM to propose to the Cabinet and the Hon’ble Prime Minister to take a positive decision to withdraw the No Guaranteed NPS and to restore back the Old Pension Scheme to the employees who were recruited on or after 01/01/2004 including to those employees who have already retired from NPS.

Sir we hope that since the NPS being a major issue agitating the minds of Central Government Employees, a dispassionate and judicious decision will be taken by the Government in this regard without further delay.

A delegation of the Staff Side Members would also like to meet you in person to apprise your good self in this regard. Awaiting for your earlier and favorable action please.