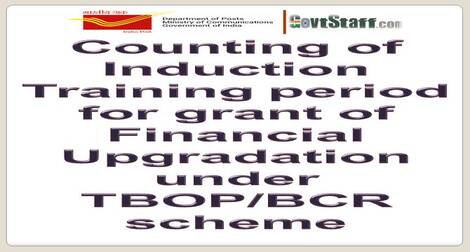 Counting of Induction Training period for grant of financial upgradation under TBOP/BCR – Deptt. of Posts

Counting of Induction Training period for grant of financial upgradation under TBOP/BCR – Deptt. of Posts

Sub: Counting of induction training period for grant of financial upgradation under TBOP/BCR scheme in accordance with Directorate’s letter no. 44-2/2011-SPB-II dated 05.05.2016.

All Heads of Circles

Vide Directorate letter of even number dated 05.05.2016, it was conveyed to all Circles to count the induction training period undertaken by PA/SA (direct recruit) working in operative office. prior to 19K6, for the purpose of TBOP/BCR scheme. Subsequently. various clarifications relating to the above instructions were sought by Postal Circles. which had been clarified vide Letter dated 07.02.2018.

2. It has been brought to notice of the Directorate by some Circles that there are cases of the officials whose training/service records are not available/traceable as the officials have retired from service since long. It has also been intimated that in some cases entry for the training period is not recorded in respective service books which were being maintained from the date of entry in the Department at that time.

3. Accordingly, all Circles were requested to intimate the period of induction training that has been counted whose documentary proof are available in their Circles.

4. The issue has been examined and a decision has been taken by the Competent Authority that a period of 75 days of induction training of such officials whose documentary proof are not available shall be counted for TBOP/BCR scheme in terms of letter of even number dated 05.05.2016 with following conditions;

i) Official will require to give an undertaking that he/she had actually undertaken induction training prior to 01.01.1986.

ii) If any official raises objection towards numbers of days of induction training, he/she may be asked to submit the documentary prof for the same.