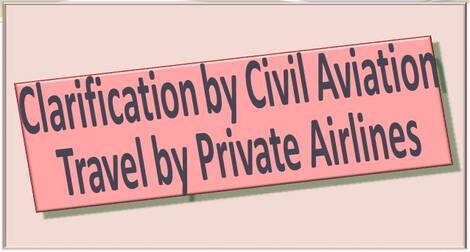 Clarification – Permission to travel by private airlines on the sectors where Air India does not operate its flight – OM dated 10.07.2017

Clarification – Permission to travel by private airlines on the sectors where Air India does not operate its flight – OM dated 10.07.2017

Subject: Clarification on permission to travel by private airlines on the sectors where Air India does not operate its flight.

The undersigned is directed to refer to this Ministry’s O.M No AV-18050/1/2017-Al dated 05.06.2017 and to state that subsequent to issuance of the above mentioned O.M, a number of queries have been received in the Ministry whether the provisions contained in this Ministry’s O.M No AV-18050/1/2017-AI dated 05.06.2017 are also applicable in the case of Leave Travel Concession. Queries are also raised whether the provisions of the above mentioned OM are also applicable in cases where there is no Air India flight between two cities but they are connected through any connecting flight of Air India.

2. The above issues have been examined in this Ministry and it is stated that provisions contained in O.M No AV-18050/1/2017-AI dated 05.06.2017 is not applicable in cases of LTC. It is further stated that the relaxation for travel by private airlines was given in those sectors only where Air India Limited is not operating. However, if the sectors are connected with any Air India connecting flights, Government officers should prefer to travel by Air India in accordance with the provision contained in Ministry of Finance’s O.M No. 19024/1/2009-E.IV dated 07.06.2016.

Read also |  RBE No. 95/2020 : Special Cash Package equivalent in lieu of All India Leave Travel Concession Fare for Railway Employees during the Block 2018-2021

(Chandra Kishore Shukla )
Under Secretary to Government of India
Tel: 24619282

Permission to travel by private airlines on the sectors where Air India does not operate its flight – Ministry of Civil Aviation OM dated 05.06.2017