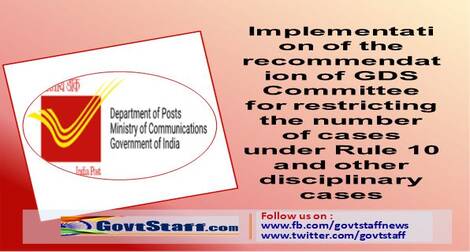 No. 17-31/2016-GDS
Government of India
Ministry of Communications
Department of Posts
(GDS Section)

Subject : Implementation of the recommendation of GDS Committee for restricting the number of cases under Rule 10 and other disciplinary cases.

2. The Competent Authority has approved the following  replacement of para 2 (i) (2) of ibid Office Memorandum  for ceiling on the appearing as Defense Assistant by Retired Government Servants under Rule 10 of GDS (Conduct & Engagement) Rules:-

3. The rest of instructions issued vide Department of Posts O.M. of even number dated 16.09.2019 shall remain unchanged The above instrurtion s will come into effect from the date of issue of this O.M.