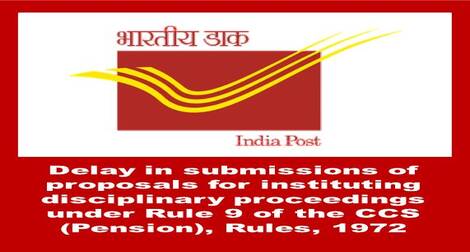 Delay in submissions of proposals for instituting disciplinary proceedings under Rule 9 of the CCS (Pension), Rules, 1972: Department of Posts

Delay in submissions of proposals for instituting disciplinary proceedings under Rule 9 of the CCS (Pension), Rules, 1972: Department of Posts

All Heads of Circles

Sub: Delay in submissions of proposals for instituting disciplinary proceedings under Rule 9 of the CCS (Pension), Rules, 1972.

It has been noticed in some cases that due care is not being taken by the Circles in timely processing of the cases for instituting disciplinary proceedings under Rule 9 of the CCS (Pension) Rules, 1972 and the proposals are submitted to the Directorate at the eleventh hour, just before completion of the crucial time limit of four years from the date of event, for instituting such proceedings. Recently, a proposal for instituting proceedings under Rule 9 against a retired officer was received from a Circle just a week before the deadline of four years of the relevant event. On examination, it was noticed that there was inordinate delay in handling of the case at all levels in the Circle. The CLI of the fraud case, 1n which the said officer was identified as subsidiary offender, was also not found duly carried out. While submitting the proposal, the lapses on the part of the retired officer were found not to have been examined properly. Moreover, there were no findings/recommendations of the CPMG as to whether the lapses on the part of the retired officer constituted ‘grave misconduct’ or otherwise.

Needless to mention that timely submission of such proposals with complete facts and relevant documents by the Circles 1s essential as sanction of the President is required to be obtained before instituting proceedings under Rule 9 of the CCS (Pension) Rules, 1972. Before submission of the proposal, the lapses on the part of the retired officer need to be examined very carefully and a specific findings of the Disciplinary Authority (DA) and HoC with regard to gravity of misconduct are mandatory. The cases, in which the lapses of relatively insignificant procedural nature are involved, which otherwise would have justified initiation of minor penalty proceedings only, had the officer been in service, would not amount to ‘grave misconduct’.

In view of the above, the undersigned is directed to request that in future any such proposals must be sent to the Directorate at least three months prior to expiry of the crucial date of four years from the date of relevant event, with all relevant details/documents and specific recommendations of the DA and HoC after proper examination of the lapses on the File No.VIG-14/1/2021-vigilance-DOP part of the retired officer/ official. If any such proceeding becomes time barred due to delay on the part of the Circles on above accounts or submission of incomplete proposal without proper recommendations and examination of lapses, as referred above, responsibility thereof would solely lie on the concerned Circles.

The above instructions may be brought to the notice of all concerned in the Circle for strict compliance.

This issues with the approval of Secretary (Posts).