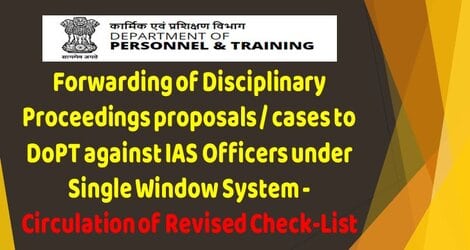 The Department of Personnel & Training (DOPT) deals with the disciplinary matters of the officers of the Indian Administrative Services (IAS), being their cadre controlling department. It receives the proposals for disciplinary proceedings against the IAS officers working in connection with the affairs of the State, from the State Government; and against the IAS officers working under various Ministries/Departments in the Central Government, from the Central Ministries/Departments of the Government of India; under the All India Services (Discipline & Appeal) Rules, 1969 and All India Services (Death-cum-Retirement Benefits) Rules, 1958. Besides, it is also entrusted with dealing with the Appeals/Memorials and Revision/Review under the said Rules.

2. It is the responsibility of the Disciplinary Authorities concerned to lead the departmental proceedings to their logical conclusion. Inordinate and inexplicable delay in conclusion of the disciplinary proceedings vitiates the proceedings and sometimes leads to litigations. This delay is mainly attributed to the documentary and procedural deficiencies and a lot of time is consumed in avoidable protracted correspondence with the State Government or the Ministry/Department concerned, for furnishing requisite documents/case-records or fulfilling the procedural deficiencies.

3. Accordingly, a proforma check list was prescribed vide this Department’s OM No.142/16/2013-AVD.| dated 10th February 2014 for referring disciplinary proceedings proposals/cases against IAS officers to Department of Personnel & Training under Single Window System. However, pursuant to OM No. 39011/08/2016 — Estt. (B) dated 28″ December 2018 and to align with the requirements prescribed for submission of cases to UPSC for referring the disciplinary cases to UPSC, it has been felt necessary to revise the checklists for submission of disciplinary proceedings proposals/ cases to DoPT for onward reference to UPSC for its statutory advice.

4. Therefore, it has now been decided to prescribe new checklists as per enclosed Appendices I & II in supersession of the checklists prescribed vide the Appendices to this Department’s OM No.142/16/2013-AVD.| dated 10th February 2014.

5. Submission of a disciplinary cases against an IAS officer and requisite case records will be checked against these new checklists through the single window system in DoPT. Appendix I to be followed hereafter; has 4 different checklists catering to 4 different situations (as described in the following table) in which a proposal of disciplinary proceeding against an IAS officer is to be submitted to DOPT by the concerned State Government/ Central Ministry/Department. Appendix II contains list of documents and folders which need to be submitted while submitting the disciplinary case through Single Window System. Another Appendix Ill has been enclosed which contains the Model letters for forwarding the proposals to Government of India, for each of the 4 situations of Appendix I.

6. Therefore, it is requested to submit the proposals of disciplinary cases against IAS officers to DoPT as per the appropriate Appendix that may be applicable in light of the situation for the case at hand with following details to ensure proper submission of proposals by various State Governments/ /Ministries/Departments as per the requirement of UPSC.

8. The operation of Single Window System requires the representatives of the State Government/Ministries/Departments of the Government of India seek prior appointment from concerned Under Secretary. During the appointed time, complete verification/ scrutiny of documents will be done and only such cases which are reckoned and found complete in all respects shall be accepted for processing. Cases found deficient vis-a-vis the mandated check-list will be returned therewith, and the case would not be deemed to have been received until it is received in complete form as per the check-list.

10. ‘Finally, Rule 6(1) (b)(ii) of AIS(DCRB) Rules,1958 stipulate time-limit for instituting disciplinary proceedings against a pensioner. Therefore, a proposal where time available for Disciplinary Authority for according sanction under said Rule is less than six months from the date of submission of the proposal to DoPT by Ministry/Department/State, the proposal will not be accepted on same day. In such case, DoPT would be afforded a time-limit of up to five working days to analyse the proposal before accepting or returning in case there is requirement of any information/clarification /document.

11. It is requested that the above instructions are strictly followed with immediate effect while submitting the proposals of disciplinary proceedings against IAS officers, with a view to streamline and expedite the processing.

Copy to Sr. Technical Director, NIC for uploading on the website.