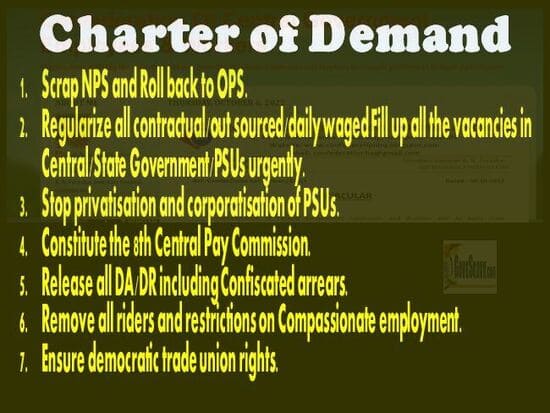 Joint Meeting of Confederation and AISGEF

Meeting was presided over jointly by Corns. Subhash Lamba, President AISGEF and Tapas Bose, Working President, Confederation. Com. R. N. Parashar explained the core issues and stressed the need of joint struggle to put pressure on govt. for settlement of the demands. Com. A. SreeKumar also elaborately spoken on the issues and endorsed the proposal of Joint struggle on Common Charter of Demands.

View :  8th Pay Commission : If there is no pay commission then what are the options यदि वेतन आयोग नहीं तो क्‍या हैं विकल्‍प

All leaders participated in the discussion and endorsed the need of joint struggle on common demands.

After detailed discussion, it was decided to put forth the following issues before the Govt. of India/Concerned authorities for immediate settlement.

It the issues are left unnoticed by the concerned authorities even beyond 30th October 2022, the concerned struggle will be organized jointly.

The following quota is allotted to the constituents of Confederation.

All Chief executives of the concerned organisations should issue circulars and distribute quota to each circle and unit and ensure participation.

The Directive Committee meeting of WFTU- TUI & PS is scheduled to Be held at Hotel Rajhans, Surajkund, Faridabad (Haryana) on 9th & 10th November-2022.

About 20 members from Foreign Countries will participate in meeting.

Detail information will be given later.

Financial Position of Confederation is very poor. Two above mentioned programme will incur heavy expenditure and Confederation has to give it’s share. We have requested several times to remit due quota to confederation only very few constituent organization’s and state COCs have remitted quota in the last three years. All constituents and state COCs are requested to remit due quota as early as possible by cheque/DD or by Direct Deposit in below mentioned Bank account.

Physical Meeting of National Executive and National Secretariat  in Delhi

With revolutionary and Festival greetings,