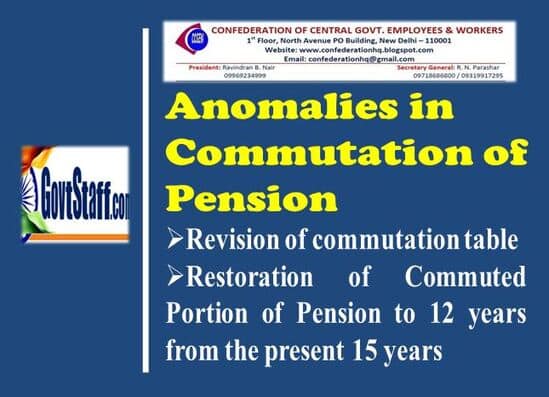 The Secretary
The Department of Pension & Pensioners’ Welfare
New Delhi -110001

Sub: – Anomalies in Commutation of Pension.

It is to bring to your kind knowledge and needful action at your end the following in respect of Anomalies in Commutation of Pension, the present commutation table as last revision took place in the year 2008 with an interest rate of 8% compounded annually, The revision is imminent due to lowering in interest rates by the Central Government and LIC especially in last five years, now 14 years is over as every 10 years pay commission is set up and pay scales and other allowances are revised third commutation table is due from 1/1/2018.

Restoration of Commuted Portion of Pension to 12 years from the present 15 years considering interest, risk factor & Life Expectancy of 70 years. In this regard a detailed brief is given below.

Commutation tables should be revised every 10 years .

Now the Government and LIC itself has lowered the interest rates from the past fifteen years especially in the last five years on small savings and LIC pension policy they should have a  new Commutation Table – 3 and Commutation Value with effect from 1/1/ 2018.

The study of various government schemes and its interest rates a re given below;

Retirees from 2006 onwards the age of retirement continues to be 60 years. After the 6th CPC, since 1.1.06, the Commutation Factor (CF) has been downgraded from 9.81 to 8.194 for the 61 year old (age next birthday) retirees, thereby reducing the commuted amount by a whopping 16.5%. On top of that, the prescribed rate of interest has been enhanced from 4.75% to 8% p.a. which is an astronomical jump of 68% even in this low interest regime. The interest rates have been slashed by the Government in the last five years by about 30%.

Overall the interest rates have gone down in the past fifteen years, especially in the last five years drastically. Hence there is a need to have a new Commutation Table number 3 with effect from 1/1/2018 considering the LIC interest rates of 6.5% or The Reserve Bank of India (RBI) repo rate at 4.4 per cent for 2020 whichever  is applicable.

The present commutation table as last revision took place in the year 2008 with an interest rate of 8% compounded annually, Commutation tables should be revised every 10 years, as every 10 years pay commission is set up and pay scales and other allowances are revised, now 14 years are over now revision is due from 1/1/2018.

Chapter 136 of the report of the Fifth Central Pay Commission, which had recommended reduction of the period of recovery of commuted pension to 12 years from 15 years. This recommendation, it was argued, was unjustifiably and arbitrarily not accepted by the Central Government, though some State Governments like Kerala, Madhya Pradesh, Orissa and Punjab had permitted restoration of full pension after 12 years of commutation.

It is pointed out that the interest charged on various Govt advances like House Building Advance, Car Advance, Festival Advance, Marriage Advance etc. is simple interest and not compound. There is no justification for the Government to recover anything more than what it has advanced to the retirees.

The risk factors include Mortality rate and life expectancy the Census department has published its data.

The death rate (Mortality rate) of India has witnessed a significant decline over the last five decades from 14.9 in 1971 to 6.0 in 2020. as per the census department data indicates that death rate at all India level has declined from 7.1to 6.0 in the last ten years, witnessing about 15% decadal decline. The corresponding decline in rural areas is 7.6 to 6.4 (about 16% decline), and for urban areas it is from 5.7 to 5.1(about 11% decline).

According to the Ministry of Statistics and Programme Implementation of India, across the different age groups from 60 to 85 years and above, the trend indicates a general fall in death rates in the country in the past ten years, Mortality rate 2008 is typically expressed in units of deaths per 1000 individuals per year. Mortality rate among the elderly in India as on 2018 and 2008 , by age group (per 1,000 people is as follows).

Hence it is very clear that about 6% of the Pensioners who are in the age group of 60 years to 70 years only have died. . The risk factor is very less for those adopted for Commutation of Pension. The death rate is only more in 75 plus years.

The commutation provisions have not kept up with time  as the life expectancy has increased , life expectancy in India has risen from 59.6 years in 1990 to 69.7 years in 2019, as per the The OFFICE OF THE REGISTRAR GENERAL & CENSUS COMMISSIONER, INDIA MINISTRY OF HOME AFFAIRS GOVERNMENT OF INDIA NEW DELHI The Sample Registration System (SRS) of the Office of Registrar General & Census Commissioner, India brings out Abridged Life Tables annually, has also published SRS-Abridged_Life_Tables_2015-2019.pdf  Expectation of life at birth for India has been estimated at 69.7 years for the period 2015-19, exhibiting an increase of 0.3 years from 2014-18. The life expectancy in the year 2008 was only 65.3 years. Hence the life expectancy has increased in the last 15 years at 0.3 per year.

Since already the Employees I Pensioners are paid less amount as the interest for commutation amount is deducted already at the time of making commutation payment through  a commuted factor, there is no point for restoration of the Commuted Portion of Pension after 15 years. Restoration of the Commuted Portion of Pension should ideally be done after 12 years for all pensioners taking into account risk factors of higher life expectancy of 70 years and also higher interest of 8% is deducted at the time of making payment of commutation instead of 6.5%.

I hope the Department of Pension & Pensioners’ Welfare consider the above and issue suitable orders.

Pension 301 News 864 Anomalies in Commutation of Pension 1 Commutation of Pension 9 Confederation 10 Pension 325
Newer Post
Imposition of penalty in the event of the death of the accused member of service – Information Document by DoPT (Updated as on 07/10/2022)
Older Post
Constitution of 8th Pay Commission, Scrap NPS etc. – Seven point Charter of Demand and calendar of Joint struggle issued by Confederation