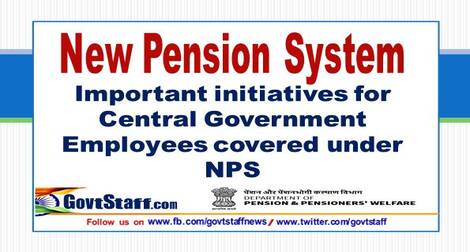 After the enactment of the PFRDA Act, 2013, as per Section 20 of the Act, the pension scheme notified on 22.12.2003 has become the National Pension System under the Act. NPS is now regulated under PFRDA Act, 2013 and regulation framed thereunder by Department of Financial Services and PFRDA.

(A) Initiatives by Department of Pension and Pensioners’ Welfare:

Read also |  Payment of family pension, death gratuity and other dues to the family on death of a Railway servant during service - RBE No. 32/2022

(B) Initiatives by Department of Financial Services:

(C) Initiatives by Department of Personal and Training :

(D) Initiatives by Ministry of Health and Family Welfare:

(i) Minimum years of qualifying service for eligibility of CGHS membership after retirement- 10 years.

(ii) No minimum qualifying years of service for availing CGHS facilities in case of death/disability.

(iii) Other conditions such as definition of family, CGHS contributions, conditions of dependency etc will be applicable as per existing rules.