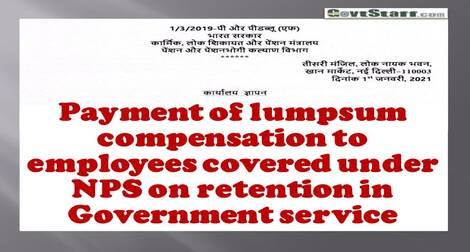 The undersigned is directed to say that on introduction of National Pension System with effect from 01.01.2004, among others, the CCS (Pension) Rules, 1972 and CCS (EOP) Rules, 1939 were amended vide Notification No.38/16/2003 -P&PW (A) dated 30.12.2003 to the effect that the provisions of the aforesaid Rules would not be applicable to the Government employees appointed on or after 01.01.2004. However, considering the hardships being faced by the employees covered under National Pension System and their families, orders were issued vide this Department’s OM No 38/41/06-P&PW dated 05.05.2009 for provisionally extending the benefits of invalid pension, disability pension and family pension under CCS (Pension) Rules and CCS (EOP) Rules on discharge of such employees from service on invalidation/disability or on their death during service.

3.         The matter has been examined in consultation with Department of Expenditure. It has now been decided that if a Government employee appointed on or after 01.01.2004 and covered under NPS is disabled, he shall also be eligible to receive a lump sum compensation computed in terms of rule 9(3) of CCS (EOP) Rules, if the disablement is attributable to Government service and the Government employee is retained in service in spite of such disablement. The provisions of this Department‘s OM No 38/41 /06-P&PW (A) dated 05.05.2009 shall stand amended to that extent.

6. In their application to the persons belonging to Indian Audit and Accounts Department, these orders are issued under Article 148(5) of the Constitution and after consultation with the Comptroller and Auditor General of India vide their “यु.ओ.संख्या-232-स्टाफ हक़ (नियम)/ए.आर./09-2019 दिनांक 27.11.2020.

7. The Administrative Divisions of all Ministries/Departments and attached/subordinate offices are requested to bring the contents of these instructions to the notice of all concerned for compliance. The cases for payment of lump sum compensation to the employees covered under NPS and who have been retained in service in spite of disability attributable to Government service on or after 01.01.2004 may be processed accordingly.