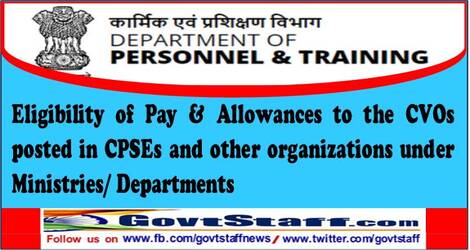 DOPT: Eligibility of Pay & Allowances to the CVOs posted in CPSEs and other organizations under Ministries/Departments

DOPT: Eligibility of Pay & Allowances to the CVOs posted in CPSEs and other organizations under Ministries/Departments

Subject: Eligibility of Pay & Allowances to the CVOs posted in CPSEs and other organizations under Ministries/ Departments.

The undersigned is directed to refer to the subject cited above and to say that the ACC had on 16.09.2016 started approving appointments of CVOs at JS level, Director level and DS level in the Grade Pay of Rs.10000/-, Rs.8700/- and Rs.7600/- (Pre-revised) respectively in the appropriate pay band according to the level at which they are working. Since then it was clarified accordingly to the concerned Ministries/Departments asking clarifications on the matter. Later on, a clarificatory OM was also issued on 01.07.2019 to all Ministries/Departments of the Government of India. In continuation of the said OM dated 01.07.2019 it is further clarified that:

(i) Officers whose appointment orders as CVO were issued on or after 16.09.2016 would be governed by the new terms & conditions as clarified vide OM dated 01.07.2019 and the officers appointed before 16.09.2016 would be governed for the extent of their approved tenure in the same organization by earlier guidelines allowing them to opt for either pay of the post or pay of the cadre.

(ii) Lateral shifting is a fresh appointment, therefore, officers appointed on lateral shift basis on or after 16.09.2016 would be governed by the new terms & conditions as clarified vide OM dated 01.07.2019.

(iv) The status of the CVOs in a CPSE would continue to be as ‘Functional Director’ of the CPSE including residential accommodation at that level, travel facilities, stay while on tour etc. However, monetization of such incentives would not be allowed. For example, if an officer claims HRA, the same would be as per his entitlement in parent cadre.

(v) Officers of CPSEs posted as CVO would be allowed to draw pay of their parent cadre. They would also be eligible to draw allowances as per their entitlement in parent cadre excluding PRP.

(Khshboo Goel Chowdhary)
Deputy Secretary to the Government of India