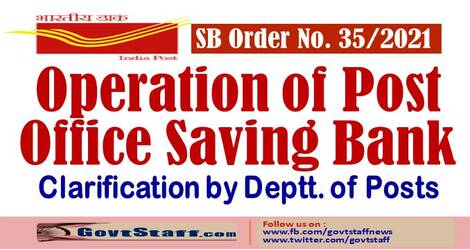 To
All Heads of Circles / Regions

1). Issue of Fresh Passbook in lieu of old passbook in any other CBS PO

The procedure for issue of fresh passbook in lieu of old I used up passbook is prescribed in Rule 44 of POSB CBS Manual. But there is no clarity whether the fresh passbook of account standing in CBS Post Offices (PO) can be issued by any other CBS PO.

It is clarified that any CBS PO can issue fresh passbook for the account standing in any other CBS PO in lieu of used up I old spoiled passbook, following the procedure prescribed in Rule 44 of POSB CBS Manual.

2). Opening  of  Joint  Account  by  two  or  more  illiterate  depositors  or   Jointly  by Illiterate Depositor and literate depositor

3). POSB  Cheque  facility  to  a  Savings Joint Account  opened  iointly  by  a literate  depositor and a illiterate depositor

As per the provisions in POSB CBS Manual and POSB Manual Volume I, for availing Cheque facility, the depositor should be literate and should be able to sign in running hand besides maintaining a balance of Rs. 500/- in the account. Cheque facility is not provided to the accounts operated by minor himself. There is no clarity on issue of cheque for a joint savings account opened by a literate and an illiterate depositor.

5). Limit on the amount of deposit in Branch Post Offices when the deposit is made through Withdrawal form (SB-7) or Cheque.

In this regard, it is clarified that in respect of subsequent deposit I deposit for opening of any type of account, through Withdrawal form and Cheque, no such limit of Rs. 50,000/- in a day in an account is fixed.

As per Rule 10 (4) of GSPR 2018, in the event of death of the guardian, the succeeding guardian shall be eligible to operate the account of the Minor or the person of unsound mind, as the case may be.

7). Presence of the depositor at the time of opening of account

As per Rule 4 of GSPR 2018, only Resident citizen of India is eligible to open an account under National (Small) Savings Schemes and as per Rule 5 of GSPR 2018, An Account may be opened by the depositor either by visiting the Accounts Office in person or through permissible electronic modes including internet  or  mobile  banking application of the respective Government Savings Bank in  -accordance  with  the procedure approved by the Reserve Bank of India, from time to time.

It is clarified that

ii. In case an account is opened by guardian on behalf of minor or on behalf of a person of unsound mind, presence of guardian is mandatory.

iv. Further, if the account opening forms and KYC documents are collected by the Post Office staff and the depositor’s signature is obtained in front of any authorized officials during the POSB account  opening  drives/melas/doorstep  canvassing  etc, presence of such depositor is not mandatory.

As per the provision in Rule 8 of GSPR 2018, an account opened as a Single Account cannot be subsequently converted into a Joint Account or vice versa. Further there is no provision in GSPR 2018 for change of any of the depositors in any Joint account.

ii). This order may be circulated to all the Post Offices.

iii). This is issued with the approval of DDG (FS).