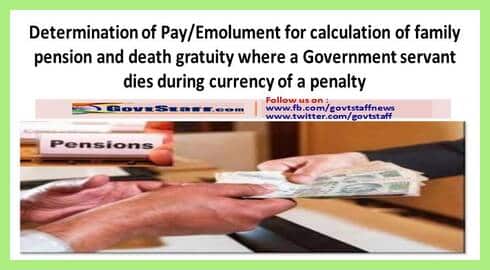 Subject: – Determination of Pay/Emolument for calculation of family pension and death gratuity where a Government servant dies during currency of a penalty – regarding

The undersigned is directed to say that 1n accordance with Rule 54(14)(c) of CCS Pension Rules, 1972, the pay for the purpose of family pension means the emoluments as specified in Rule 33 of the CCS (Pension) Rules, 1972 or the average emoluments as referred to in Rule 34 of the CCS (Pension) Rules, 1972, if the emoluments of the deceased Government servant have been reduced during the last ten months of his service otherwise than as penalty. Similar provision exists in Rule 50(5) for calculation of retirement/death gratuity.

4. The matter has been examined in consultation with Department of Expenditure. The manner in which the pay of a Government servant is to be regulated on imposition of penalties of reduction to a lower stage, withholding of increment and reduction to a lower time scale, has been explained in Department of Personnel & Training’s OM No. 11012/15/2016-Estt A-III dated 18th June, 2019. These instructions also bring out the penalties on imposition of which there is no impact on the pay after the expiry of the period of penalty and also the manner in which notional pay of a Government servant is to be fixed during the currency of such penalties.

7. These instructions shall be applicable with immediate effect and the past cases shall not be re-opened. However, the cases where the death of a Government servant has occurred before the issue of these instructions but family pension and death gratuity has not been determined so far may also be decided in accordance with these instructions.

8. Necessary amendment in the CCS (Pension) Rules, 1972 shall be made separately.

10. In its application to persons belonging to Indian Audit and Accounts Department, these orders are issued under Article 148(5) of the Constitution and after consultation with the Comptroller and Auditor General of India vide their यू.ओ.संख्‍या-216-स्‍टाफ हक.(नियम)/ए.आर./09-2019.

11. The Administrative Divisions of all Ministries/Departments and attached/subordinate offices are requested to bring the contents of these instructions to the notice of all concerned for compliance.

(Sanjoy Shankar)
Deputy Secretary to the Government of India