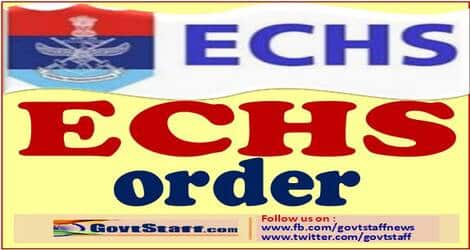 AMENDMENT TO EXECUTIVE INSTRUCTIONS: PROCEDURE FOR RE-IMBURSEMENT OF MEDICINES AND CONSUMABLES TO ECHS BENEFICIARIES

2. Concept of Reimbursement of NA medicine was brought in effect last year keeping in view non availability of medicine due to paucity of funds. However with the improvement in fund situation it is visualised that this procedure will be resorted to as a last resort with an intention to reduce number of such cases.

3. An amendment was carried out vide our letter at Para 1(b) to permit processing the bills offline with a view to:-

(a) Cut down cost on commission being paid to BPA.
(b) Obviate uploading of the bills on line where the volume of bills is high.
(c) Ensure early disbursement to veterans.

View :  Advisory on Dental Treatment at ECHS Polyclinics - Preventing measures to be adopted against Covid-19

4. Based on the inputs/feedback received from various stake holders, it is hereby directed to process the bills on line as per the guidelines and instructions given vide our letter at Para 1(a) above with immediate effect. —

5. Methodology for reverting to online processing only will be as under:-

(a) Bills pending with PCs as on date will be processed online as per instructions given at letter at Para 1(a). —

(c) Contingent Bills already held with RCs with or without countersignatures of OIC ECHS at Stn HQ will be processed for payment offline.

6. Since the prescription slip holds all the details, the same will be treated as NA Certificate. If the medicine is NA in the PC medical, store as well as fron the ALC the NA medicines will be indicated on the prescription only. The prescription will be signed by pharmacist and countersigned by the OIC PC after issuing the available medicines. Vitamins and supplements which are prescribed as a part of primary treatment for some ailments/diseases for the patient will ONLY be included as NA.

View :  Reimbursement of cancellation/reschedule charges for air/train tickets booked for the purpose of LTC and relaxation of LTC advance due to COVID-19 pandemic - Deptt. of Posts

7. Instruction for BPA. The BPA shall incorporate the following in the individual claim menu in BPA login IDs of OIC PC.

(a) A separate dropdown menu/tab to be made available under individual OPD claim category specifically for individual re-imbursement claim for medicines and consumables.

(b) On entering the beneficiary card No the following details should be auto populated from system:-

(c) Provision for capture of following details for processing of bills should be available:-

(d) The contingent bill (as per the format given in Appx ‘B’) should be available for download with available details auto filled, for taking signature of the beneficiary. The balance details not captured in the system shall be filled by individual and entered by DEO at Polyclinic.

(e) The documents uploading section of the polyclinic should select only the following documents for uploading :-

8. List of documents to be submitted by the individual to the parent PC for online processing will be as under:-

9. The veterans are allowed to submit a consolidated bill for the complete duration of NA(each NA will however not excedd 15/30 days as specified under Gen/Special condition).

10. These instructions will come into effect on the date of issue of this letter.