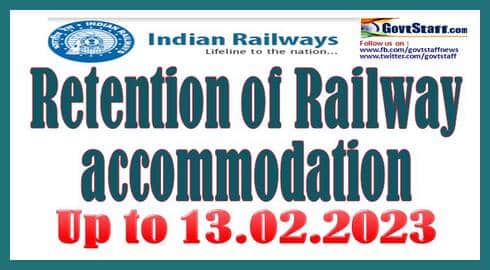 Sub: Extension for retention of Railway accommodation at the previous place of posting in favour of SAG & above officers posted to NER, ECoR, SWR & WCR.

The issue of permitting the Railway officers (SAG & above level) posted to North Eastern Railway, East Coast Railway, South Western Railway & West Central Railway to retain Railway accommodation at their previous place of posting beyond 13.02.2022 has been considered by the Full Board.

2. In exercise of the powers vested with the full Board to make reasonable relaxations in public interest for a class/group of employees in all or any of the provisions regarding house allotment/retention, the Full Board have now decided that retention of railway accommodation at the place of previous posting by SAG & above level officers posted to North Eastern Railway, East Coast Railway, South Western Railway & West Central Railway may be permitted for a further period of one year beyond 13.02.2022 i.e. up to 13.02.2023.

Read also |  Leave: Regularization of absence period of officers/staff due to lockdown.

3. The officer availing retention would not be entitled to house allotment at current place of posting in case there is pending priority list for allotment of house at that place. This takes effect from the date of issue of this letter.

4. This issues with the concurrence of the Finance Directorate of the Ministry of Railways.