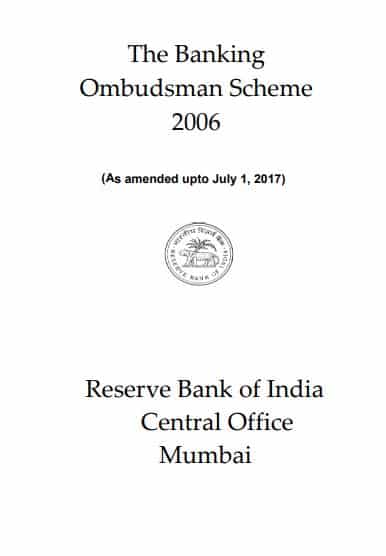 The Scheme is introduced with the object of enabling resolution of complaints relating to certain services rendered by banks and to facilitate the satisfaction or settlement of such complaints.

(1) This Scheme may be called the Banking Ombudsman Scheme, 2006.
(2) It shall come into force on such date as the Reserve Bank may specify.
(3) It shall extend to the whole of India.
(4) The Scheme shall apply to the business in India of a bank as defined under the Scheme.

2. SUSPENSION OF THE SCHEME

(1) The Reserve Bank, if it is satisfied that it is expedient so to do, may by order suspend for such period as may be specified in the order, the operation of all or any of the provisions of the Scheme, either generally or in relation to any specified bank.

(2) The Reserve Bank may, by order, extend from time to time, the period of any Suspension ordered as aforesaid by such period, as it thinks fit.

(1) ‘award’ means an award passed by the Banking Ombudsman in accordance with the Scheme.

(2) ‘Appellate Authority’ means the Deputy Governor in charge of the Department of the Reserve Bank implementing the Scheme.

(3) ‘authorised representative’ means a person duly appointed and authorised by a complainant to act on his behalf and represent him in the proceedings under the Scheme before a Banking Ombudsman for consideration of his complaint.

(5) ‘bank’ means a ‘banking company’, a ‘corresponding new bank’, a ‘Regional Rural Bank’, ‘State Bank of India’ a ‘Subsidiary Bank’ as defined in Section 5 of the Banking Regulation Act, 1949 (Act 10 of 1949), or a ‘Primary Co-operative Bank’ as defined in clause (c) of Section 56 of that Act and included in the Second Schedule of the Reserve Bank of India Act, 1934 (Act 2 of 1934), having a place of business in India, whether such bank is incorporated in India or outside India.

(6) ‘complaint’ means a representation in writing or through electronic means containing a grievance alleging deficiency in banking service as mentioned in clause 8 of the Scheme.

(9) ‘secretariat’ means the office constituted as per Sub-Clause (1) of Clause 6 of the Scheme.

(10) ‘settlement’ means an agreement reached by the parties either by conciliation or mediation under Clause 11 of the Scheme.