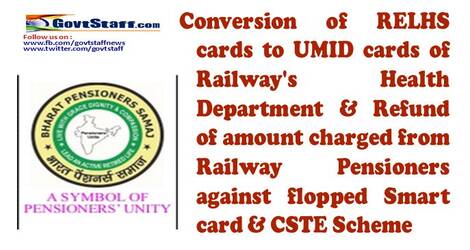 The Honorable Minister for Railways
Government of India

The CRB/CEO
GOI MOR Railway Board

It is observed that despite many efforts. The elderly Rly pensioners are always ignored & the timely quality treatment of various chronic diseases is often denied by the Railways Health department. The pensioners are taken to be an easy prey by the Railway’s medical department. On the pretext of quick and good treatment, various schemes like Smart card/CTSE card are launched flitching and looting the elderly Pensioners, without giving any benefit by way of timely quality treatment even in emergencies (w/o refferal).

Following are the deatils of Schemes which flopped due to indifference attitude of Railways health deparment but the amount charged from pensioners for joining these Schems is not refunded.

1. RELHS Card costing full last month salary of retiring employees/2 revised basic pensions of the retired, on the assurance of life long validity to avail Rly medical facilities throughout the country. Now it has become invalid on the launch of UMID Card. Lakhs of beneficiaries are yet to get UMID Cards but it has been made Compulsory for availing even day-to-day medical attendance/treatment rendering RELHS card invalid resulting in huge sufferings to such beneficiaries. Those who could generate UMID card are unable to get treatment in private empanneled hospitals without referal. Even when they vist Rly hospitals/ health units other than the one recorded in UMID card. Theyare not readily enternained. Bharat Pensioners Samaj demands continued validity of RELHS cards till SUO Mutu conversion of RELHS cards to UMID cards and proper implementation of all facilities promised in UMID card.

2. SMART CARD scheme launched in Feb 2008 abandoned in Jan 2011 W/O intimating reasons to beneficiaries. The Amount charged need to be refunded with interest.

3. In July 2012 a similar scheme was launched but could not be implemented properly due to indifferent attitude of Rly Medical authorities.

4. CTSE smart card CASHLESS TREATMENT SCHEME IN EMERGENCY) INTRODUCED In July 2016 at the cost up to Rs 30,000/- to Pensioners (according to pre retrial status). Scheme is stated to have been closed in minutes of NFIR PNM 1st & 2nd December 2021 item 7/2017). However, there is ambiguity beneficiaries are confused. CTSE Portal is still working giving an imperssion that the scheme is inforce. CTSE card is not recognised in CTSE empanneled hospitals. Apparently Scheme has floped. Amount paid by pensioners to join CTSE scheme need to be refunded with interest. .
(may connect joint letter by ex Member Staff & and ex FC addressed to then CRB Sh. V. K. Yadav. (Copy attached)

5. Last but not the least the Railway Hospitals & Health Units are under invested do not have adequate infrastructure/facilities always short of medicines & manpower etc (Vol II Para 2 of Rationalization of Government bodies proposals for Rly Ministry August 2021). The prescribed medicines are never issued in one go, thus the elderly persons have to visit the Hospital/heath unit again and again.

Sir, Considering the services of present pensioners to the Railways and the Country for a long time. BPS expects positive action by refunding the amount charged for Smart card 2008 & CTSE card, as well as Suo-moto issue of UMID cards to all RELHS card holders and to allow existing RELHS cards till UMID card is issued to all beneficiaries.