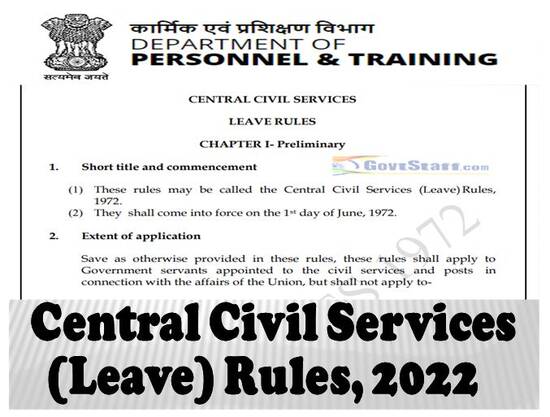 (1) These rules may be called the Central Civil Services (Leave) Rules, 1972.

Save as otherwise provided in these rules, these rules shall apply to Government servants appointed to the civil services and posts in connection with the affairs of the Union, but shall not apply to-

(1) In these rules, unless the context otherwise requires-

(b) “Audit Officer” means the Accounts and Audit Officer, whatever his official designation, in whose circle the office of the Government servant is situated;

(fa) “disability” means “specified disability”, “benchmark disability” and “disability having high support needs” as referred to in the Rights of Persons with Disabilities Act, 2016 (49 of 2016).

(h) “Form” means a Form appended to the Second Schedule to these rules;

(A) an officer who, having been declared by the Union Public Service Commission to be eligible for appointment to the ministerial Services of the Government of India, has been appointed to a temporary or officiating vacancy on the understanding given to him in writing before he took up the appointment, that that vacancy is expected to become permanent but is not confirmed after completion of three years continuous service;

(B) an officer who may be declared as quasi-permanent under the Central Civil Services (Temporary Services) Rules, 1965.

(k) “Head of Mission” means Ambassador, Charge d’ Affaires, Minister, Consul-General, High Commissioner or any other authority declared as such by the Central Government, in the country in which the Government servant undergoes a course of study or training;

(i) a Commissioned Officer of the Army, the Navy or the Air Force, or

(ii) (a) a Junior Commissioned Officer (including an honorary commissioned officer), or an ‘other rank’ of the Army, or

(b) a Branch List Officer or rating of the Navy, or

(c) an airman including a Master Warrant Officer of the Air Force;

(m) “Vacation Department” means a department or part of a department, to which regular vacations are allowed, during which Government servants serving in the department are permitted to be absent from duty.

4. Government servants on temporary transfer or on foreign service

(1) Government servants to whom these rules apply shall continue to be governed by these rules while on temporary transfer to the Indian Railways or to a State Government or while on foreign service within India.

5. Transfer from services or posts governed by other leave rules

Unless it be otherwise provided in these rules, a permanent Government servant to whom these rules do not apply –

(a) when transferred temporarily to a service or post to which these rules apply, shall remain subject to the leave rules which were applicable to him before such transfer; and

Provided that where a Military Officer not in permanent civil employ has elected to draw civil rates of pay, his leave shall be regulated as per the provisions under these rules:

Provided further that in the event of his release/discharge from the Armed Forces, he shall carry forward the annual leave due to him with effect from the date of such release/ discharge.

Provided that in the event of his return to a post or service to which the Central Civil Services (Leave) Rules, 1972 apply, the benefit of cash equivalent of leave salary payable under Rule 39 shall be modified as under —