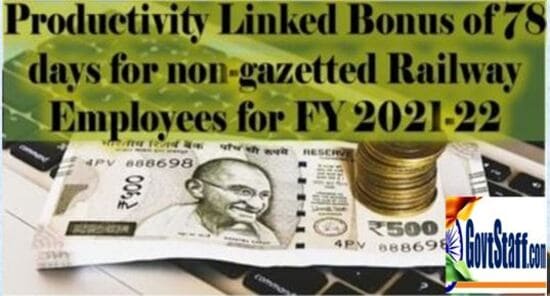 As per above tweet the Union Cabinet, chaired by the Prime Minister Shri Narendra Modi, today approved the Productivity Linked Bonus (PLB) equivalent to 78 days’ wages for the financial year 2021-22 for all eligible non-gazetted Railway employees (excluding RPF/RPSF personnel).

This would be announced during Official Cabinet briefing by Union Ministers Shri Anurag Thakur which is scheduled at 3 PM today.  The official PIB news will be shared here.

About 12 lakh non-gazetted Railway employees are likely to benefit from the decision. Payment of PLB to eligible railway employees is made each year before the Dusshera/ Puja holidays. The decision of the Cabinet shall be implemented before the holidays for this year as well.

The PLB amount of 78 days’ wages were paid for the financial years from 2010-11 to 2020-21. For the year 2021-22 also PLB amount equivalent to 78 days’ wages will be paid which is expected to motivate the employees for working towards improving the performance of the Railways.

The Productivity Linked Bonus on Railway covers all non-gazetted railway employees (excluding RPF/RPSF personnel) who are spread over the entire country.