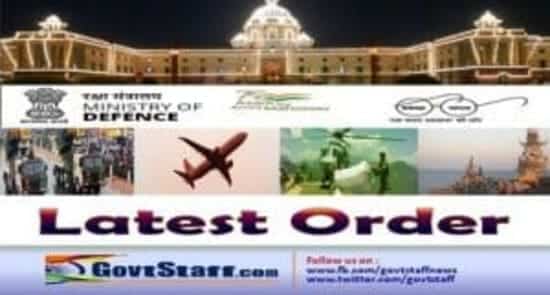 Government of India
Ministry of Defence
Department of Ex-Servicemen Welfare
D(Pension/Policy)
Room No. 220A, ‘B’ Wing
Sena Bhawan, New Delhi – 110011

The undersigned is directed to refer to above mentioned subject and to state that O/o CGDA vide their UO No. 5669/AT-P/Min Cases/Offs/Vol. II(PC) 17.06.2022 have intimated that prior to issue of Gol, MoD letter No. 1(2)/2002/D(Pen-C) dated 1st September 2005, as amended vide Gol, MoD letter No. 1(2)/2002/D(Pen-C) dated 31st May, 2006, O/o PCDA(P), Prayagraj was vested with powers of adjudicating and sanctioning the claims of civilian Government servants employed in Military capacity in accordance with Army Instruction 64/76. With the issuance of GoI, MoD ibid letter dated 1st September, 2005, as amend vide GoI, MoD letter dated 31st May, 2006, institution of MA(P) was abolished which led to ambiguity on powers of adjudication of such claims.

2. IHQ of MoD (Army)/QMG Branch, ADG APS vide their letter No. 90100/APS-1D dated 11.08.2022 have also requested to take suitable decision on the case and issue necessary instructions to all concerned to adjudicate the initial claim and appeals of Disability Pension and Special Family Pension cases of APS Deputationist (Officers & JCOs/ORs) including more than 500 cases pending since 2016.

3. The matter has been examined in this Ministry and the following is observed:

3.1 AI-64/76 prescribes the procedure for grant of pensionary benefits in respect of Civilian Govt. servants employed in the Military Capacity with a military force. As per ibid AI, the grant of Special Family Pension (SFP) and family gratuity, where admissible, shall be regulated in accordance with Pension Regulations for the Army in respect of individuals who die during the period of deputation and the cause of death is regarded as attributable to or aggravated by Military Service.

3.2. Where an individual is discharged/released from the Army in circumstances entitling him to the grant of disability pensionary awards, Defence Services Estimates will pay only the disability element of disability pension and Constant Attendance Allowance, where admissible, at the rates and under the conditions as are applicable from time to time. The individual concerned will get this in addition to invalid pension under civil rules if he is invalided from civil service also or otherwise in addition to his pay in civil appointment. Sanction for such award shall be issued by CDA(Pen}, Allahabad.

4. Army Hars. vide their letter No. B/41052/APS Adjudication/AG/PS-5 dated 06.05.2022 have intimated that the AI 64/76 still holds good. Hence, the Civilian Govt. servants employed in the Military Capacity with a military Force are entitled for Disability Element of Disability Pension or Special Family Pension in case of disability/death which is attributable to or aggravated by Military Service.

5. As per existing provisions mentioned in the MoD letter dated 01.09.2005, amended vide MoD letter dated 31.05.2006, decision regarding attributability/aggravation, for the purpose of grant of war injury/disability pension or lump-sum compensation in lieu of disability/war injury element would be taken by AG/ADGPS/OIC Records and equivalent in Navy and Air Force. Assessment with regard to percentage of disability as recommended by the IMB/RMB and as approved by the next higher medical authority in respect of PBORs and Service Hqrs. in case of Commissioned Officers would be treated as. final unless the individual himself requests for a review except in cases of disabilities which are not of a permanent nature. In the event of substantial difference of opinion between the initial award given by the medical board and approving authority, the case will be referred to a Review Medical Board. The opinion of the Review Medical Board which will be constituted by DGAFMS as and when required shall be final.

6. It may be seen that as per the revised provisions, the role of MA(P) in the matter of; adjudication of disability pension claims of Armed Forces Personnel and SFP claims of their NoK has been dispensed with.

7. Where an individual Civil Govt. servant employed in Military Capacity with a Military force, is discharged/released from the Army in circumstances entitling him to the grant of disability pensionary awards, the disability element of disability pension and Constant Attendance Allowance, where admissible is to be paid from Defence Services Estimates in accordance with AI 64/76. Hence, their initial claim/appeal for Disability Pension and Special Family Pension may also be adjudicated by the same authority who is adjudicating the initial claims/appeal cases of Regular Armed Forces Officers/PBORs.

8. In view of the above, Army Hgrs. is requested to issue necessary instruction to all concerned to adjudicate the initial claims and appeals of Disability Pension and Special Family Pension cases of Civilian Govt. Servants employed in Military Capacity with a Military force (including APS deputationists).

(B L Meena)
Under Secretary to the Govt. of India