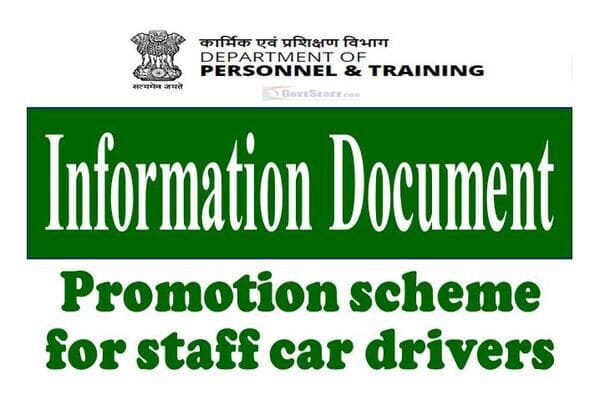 Note : While due care has been taken to compile this document, however, if any omissions or correction are noticed, the same may be brought to the notice of the Department of Personnel & Training.

2.1.1  The nomenclature of the posts in the various scales will be as under:-

2.1.2  If any fresh vacancies are created as additions to the existing strength of Staff Car Drivers, they will be created only in the Pay Level – 2.

2.2     Where the Cadre is too small for the purpose of creation of higher grades, the possibility of combining of different cadres and operating it on a nodal basis may be considered by the concerned Ministries/Departments. In such cases, movement of personnel may not be required and the senior most driver(s) in the combined seniority/eligibility list promoted in situ.

2.3     The minimum eligibility criteria for appointment to the posts in the above scale will be as under:-

2.4 The method of appointments to the posts in Grade II and Grade I of Staff Car Driver will be by promotion on Non-Selection (Seniority-cum-Fitness) basis and will be further subject to passing of a Trade Test of appropriate standard, contained in the Appendix-I to this OM.  Promotion to the Special Grade shall be by non-selection (seniority-cum-fitness) from Grade I with 3 years’ regular service in Grade-I of Staff Car Drivers.

2.5 For the purpose of conducting Trade Test as required at these levels, a scheme in indicating the syllabus has been enclosed as Appendix-I to this OM.

2.6 All the above appointments will be subject to the application of reservation orders as applicable to these grades.

2.7 As the powers to frame Recruitment Rules for Group C posts have already been delegated to Ministries/Departments, they may frame the rules in accordance with the guidelines, by indicating the eligibility criteria laid down in this OM.

3. These orders would not apply in the Ministries/ Departments where drivers already have more than one scale of pay.

View :  Revision of Regulation relating to Rate of Family Pension for Army, Part-I (2008)

5. The benefits of the MACPS shall also be extended to the regular Staff Car Drivers of the Central Government Ministries/Departments/Offices, as a fall back option, if they are unable to get promotion within the percentage based present system.   Para 13 of the Annexure-l of OM No. 35034/3/2015-Estt.(D) dated 22.10.2019 relating to the MACP Scheme  accordingly stands modified to this effect.  In other words, the Staff Car Driver Scheme and the MACPS shall run concurrently.

I. Appointment to Grade II of Staff Car Drivers (SYLLABUS)

(a) Practical test based on the above.

II. Appointment to Grade I of Staff Car Drivers (SYLLABUS)

(a) Practical test based on the above.