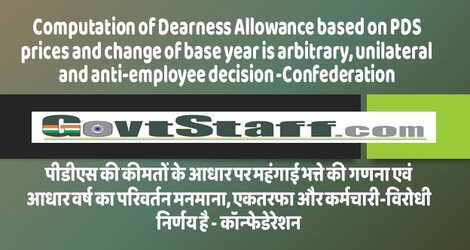 Confederation of Central Government Employees and workers notes with distress that the Government has made yet another attempt to depress the wages of the workers this time in the organised sector. The indexation of wages and the consequent grant of compensatory allowance had been the product of bitter and prolonged struggles of the workers. The present system of computing the dearness compensation, though varies from sector to sector, is based on the consumer price index brought out in stipulated periodicity by the Ministry of Labour. There had been varied and wide ranging criticism over the manner and methodology adopted in the computation of the index figures. Instead of addressing those genuine and legitimate deficiencies, the Government has gone now to create a new series which would further accentuate those very defects to the utter disadvantage of the workers. It is all the more deplorable as the Government has chosen the pandemic days to usher in the new series of CPI.

The Government will bring out the new series with 2016 as the base year. 2016, in so far as Indian economy is concerned, is an extremely extra ordinary year when the economic activities almost came to a grinding halt over the grand declaration of demonetization. It is an established dictum that base year selected must be a normal year, sans political, social and economic upheaval. Why then 2016, has no logical explanation.

The Government has also decided to change the components of the basket. Post justification had been an afterthought, conceived to cover up. Had there been a consultation with the stake holders, many of the controversies that have arisen could have been avoided. By depressing the food content in the basket, the lower rung in the working class will lose out more. In the past, the base year change used to be effected once after two decades. Why then the periodicity was reduced and bring out a new series now begs reasoned explanation.

Another important decision that would further depress the dearness compensation to the workers is that the Government has chosen the PDS prices of the commodities for computation. Universal PDS was disbanded when the new liberal economic policies were ushered in years back. The present truncated PDS targets only a segment of the population and most of the Central Government employees are excluded from the PDS in almost all States in the country. This apart the prices of the commodities sold in the PDS is highly subsided. Consequently, the prices of commodities included in the basket are nothing but imaginary and often below even the cost of production of such items. Since dearness compensation as an accretion to wages is available for the workers in the organised sector, the new series will bring about drastically reduced salary packet. The Centrals Government employees especially will lose out heavily once the new series are put in operation, which is announced to be with effect from September, 2016 onwards.

On the advice of the Technical Advisory committee, the geometrical mean will be employed instead of the arithmetical average . The conversion factor of 2.88 is devised possibly without taking this factor into account. The conversion factor will be employed in the case of Central Government employees for a very long time to come from September, 2020 onwards. The ruling class was always opposed to the grant of dearness compensation, rather the very concept itself. In the long run, they want the wages to remain static and the prices dynamic to ensure that the Corporates are happy. The resentment against this arbitrary, unilateral and anti-employees decision must be manifested by the increased participation of the Central Government employees in the ensuing one day general strike slated for 26th November,2020, which is organised by the Central Trade Unions on behalf of the Indian working class.